William Barber
stated on February 20, 2020 in a tweet:
Says “every time" the DSCC endorsed someone in North Carolina's U.S. Senate primary, "and the person they didn’t support was black, the candidate they picked ended up losing."

The same is not true for organizations in Washington.

The DSCC’s decision didn’t go over well with the Rev. William Barber, a liberal activist from North Carolina. Smith, who is black, along with Cunningham is considered a top primary competitor.

"Every time this has happened in the past & the person they didn’t support was black, the candidate they picked ended up losing in the fall b/c Dems unnecessarily divided themselves in the primary," Barber tweeted on Feb. 20, adding that the DSCC should stay out of the primary. 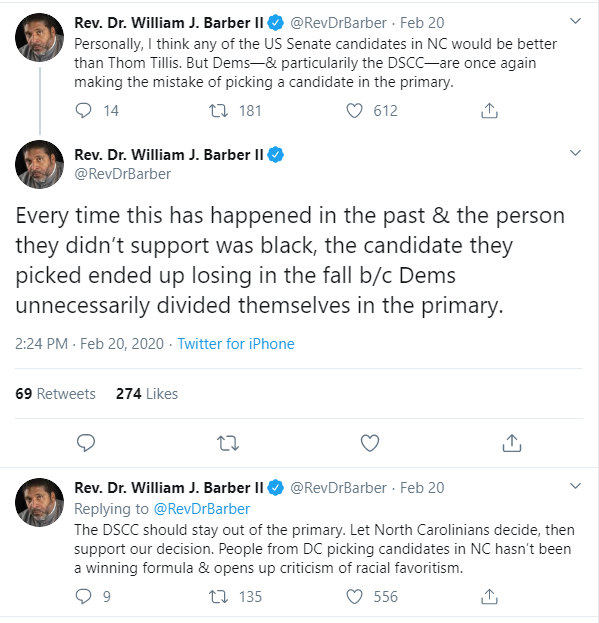 Is it true that every time the DSCC has endorsed a candidate in North Carolina’s US Senate primary, and overlooked a black Democrat, the endorsed candidate went on to lose?

Martha Waggoner, a spokeswoman for Barber, said Barber had one race in mind, back in 2002.

That year, "the Democratic establishment went outside its normal way of doing business and endorsed Erskine Bowles in a primary race that included Dan Blue," she said.

Bowles beat Blue in the Democratic primary, then went on to lose to Republican Elizabeth Dole. Blue is now the minority leader in the state Senate.

"Since Blue was the only previous Democratic African American candidate for U.S. Senate here, his use of ‘every time’ was referring to this instance," she said.

But the claims by Waggoner and Barber are both inaccurate.

In recent years, several black candidates filed to run for Senate in North Carolina. And in 2008, the DSCC overlooked a black candidate to support Kay Hagan, who went on to win the seat.

To check Barber’s claim, we searched for an election where:

This situation happened with Hagan.

North Carolina voters have only elected two Democrats to the U.S. Senate over the last 22 years: Hagan in 2008 and John Edwards in 1998.

Williams, an attorney, was the only black candidate in the race.

News reports show that the DSCC not only backed Hagan in the primary, but talked her into running.

Indyweek reported in 2008 that the DSCC, along with state Democratic leaders, "talked Hagan into running last fall just weeks after she announced that she wouldn't." The News & Observer reported in 2007 that Hagan was recruited by former Gov. Jim Hunt and New York Sen. Charles Schumer, chairman of the Democratic Senatorial Campaign Committee, after they had tried unsuccessfully to recruit state Rep. Grier Martin of Raleigh.

DSCC spokesman Matt Miller told Politico in 2008 that his group "worked hard to get Hagan; we really thought Dole was vulnerable," he said, adding: "Hagan has turned out to be a great candidate, all under the D.C. radar."

Campaign finance reports filed with the Federal Election Commission show the DSCC spent tens of thousands of dollars on Hagan’s campaign prior to the May 6, 2008, primary.

In North Carolina, several black candidates have run for U.S. Senate in recent years. And the DSCC hasn’t endorsed any of them. But the DSCC’s pick has not usually worked out in the general election. 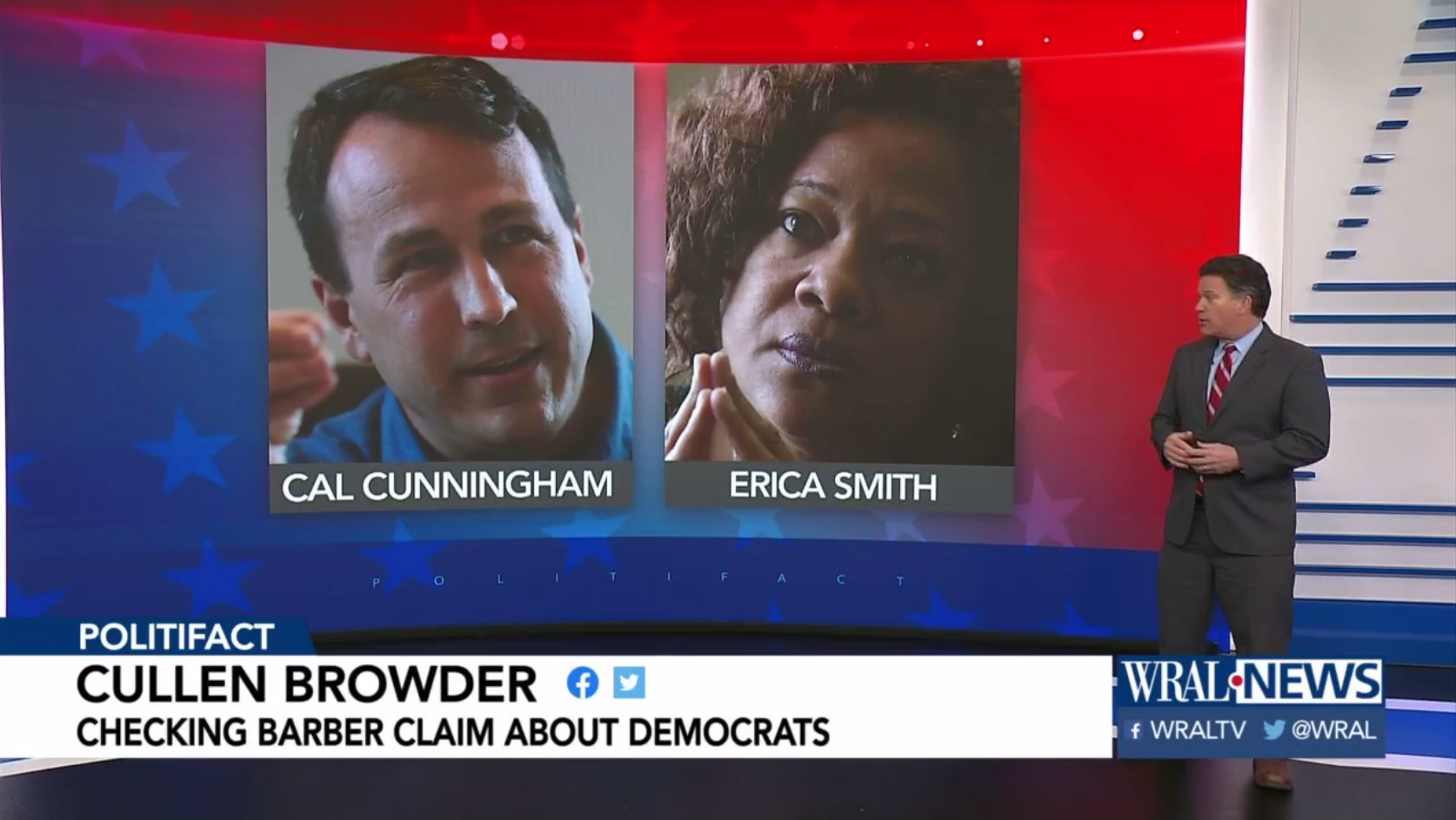 In 2016, Ernest Reeves and Chris Rey were defeated in the Democratic primary by Deborah Ross, who was endorsed by the DSCC. In the general election, Ross lost to incumbent Republican Richard Burr.

In 2014, Hagan was the incumbent. Reeves ran against her in the primary and lost. Hagan went on to lose to Tillis.

In 2010, there were three black candidates: Ken Lewis, Ann Worthy and the same Marcus Williams from 2008. As in 2020, the DSCC supported Cunningham in the primary.

But it was Elaine Marshall who won the Democratic nomination. She then lost to Burr in the general election.

Another of Barber’s Feb. 20 tweets was a little more on-point.

"People from DC picking candidates in NC hasn’t been a winning formula & opens up criticism of racial favoritism," Barber tweeted.

Dating back to 2008, there have been four US Senate elections in North Carolina.

When PolitiFact shared its findings with Barber, he credited Hagan’s 2008 win to "Obama’s coattails."

"It was an election like no other, and the endorsement still wasn't right. Let North Carolinians choose their own candidate. After the primary, everybody can get behind that person," he said in an email.

Barber said that "every time" the Democratic establishment overlooked a black candidate and endorsed someone else in the U.S. Senate primary, that candidate went on to lose.

Records show that there was a black candidate, Marcus Williams, in the 2008 U.S. Senate race. That year, the DSCC backed Kay Hagan in the primary and she went on to beat incumbent Republican Elizabeth Dole.

Barber’s claim was too sweeping. He’s right that the DSCC doesn’t have a great record in North Carolina. But he’s wrong to say the DSCC-backed candidate has lost "every time" it overlooked a black Democrat. We rate this claim False.

Story by WUNC, "An introduction to the four NC Democrats running for US Senate," posted Feb. 26, 2016.

Story by the Greensboro News & Record, "Lewis backs Marshall for Senate," posted May 19 2010.

Official US Senate primary election results on the North Carolina elections board website.