Donald Trump
stated on June 18, 2020 in a Tweet:
CNN aired a video of a toddler running away from another toddler with the headlines “Terrified toddler runs from racist baby” and “Racist baby probably voted for Trump.”

President Donald Trump shared a manipulated video on Twitter that claimed CNN aired fake headlines and lied about the relationship between two toddlers in order to stoke racial tension.

The video, which Twitter marked with a "manipulated media" label, displays the CNN logo and a banner that says, "Terrified todler (sic) runs from racist baby," as a black toddler runs down a sidewalk and a white toddler runs after him. The banner switches to "Racist baby probably voted for Trump." 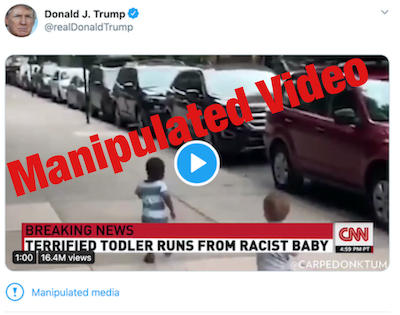 The video then fades to black and text appears on the screen that reads, "This is what really happened," before showing the full video of the boys excitedly running toward each other and embracing.

It concludes with text that says, "America is not the problem. Fake News is. If you see something, say something. Only you can prevent fake news dumpster fires."

Trump shared a deceptively edited video. CNN never ran those headlines, and it accurately covered the story in 2019.

The video was flagged as part of Facebook’s efforts to combat false news and misinformation on its News Feed. Trump, because he is a politician, is exempt from Facebook’s policies against sharing false or misleading information. But other people online have shared the same video, and they are not exempt from the Facebook fact-checking program. (Read more about our partnership with Facebook.)

The video of the toddlers — Maxwell and Finnegan — was taken in the Washington Heights neighborhood of New York City and was posted on Facebook in September 2019 by Michael Cisneros, Maxwell’s father.

The clip quickly went viral, and the boys and their parents appeared on various shows, including a CNN broadcast and the Ellen DeGeneres Show.

Several media outlets, CNN included, accurately covered the story and showed the full video of the boys hugging and then running down the sidewalk.

Cisneros told CNN last year that the boys are best friends and that he posted the video because it was a beautiful moment to share in the midst of racism and hate in the world.

"Utterly shocked. Trump posted this on his Twitter. For all you Trump supporters, I hope that his use of their beautiful video in this way disgusts you. It should," Finnegan’s mom, Erica Russo McKenna, said on Facebook.

The manipulated video includes a watermark for a Twitter account called @CapreDonktum, which routinely creates and posts satirical memes and parody videos.

"CNN did cover this story — exactly as it happened," the tweet reads. "Just as we reported your positions on race (and poll numbers). We’ll continue working with facts rather than tweeting fake videos that exploit innocent children. We invite you to do the same. Be better."

CNN did cover this story - exactly as it happened. Just as we reported your positions on race (and poll numbers). We’ll continue working with facts rather than tweeting fake videos that exploit innocent children. We invite you to do the same. Be better. https://t.co/T1nBtejZta

Trump tweeted a video that suggests CNN aired false information about the relationship between two toddlers.

The video is doctored. CNN did not air the headlines that appear in the clip.

We rate this Pants on Fire!

CNN, These two toddlers are showing us what real-life besties look like, Sept. 10, 2019