Darren Jackson
stated on May 27, 2020 in a tweet:
“Two-thirds of Americans disapprove of Donald Trump not wearing a face mask in public.”

President Donald Trump participates in a tour of a Honeywell International plant that manufactures personal protective equipment, Tuesday, May 5, 2020, in Phoenix. (AP)

When North Carolina legislators returned to the Capitol, the House minority leader showed up wearing a surgical mask bearing the state flag.

Health experts recommend that Americans wear face masks while in public to prevent the spread of the novel coronavirus, which can be transmitted through aerosol droplets.

So Darren Jackson, the Democratic leader in the GOP-controlled state House, has urged his colleagues to do the same. And on May 27, Jackson offered some advice for President Donald Trump.

"Two thirds of Americans disapprove of Donald Trump not wearing a face mask in public, and the vast majority supports elected officials being required to wear masks in government buildings," Jackson tweeted. 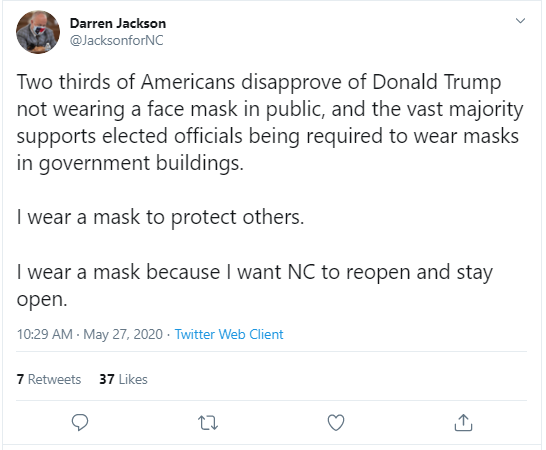 Is he right about the polling on Trump?

Overall, yes: Polls show that most poll respondents believe the president should wear a mask, though the level of support varies by political affiliation.

When we reached out to Jackson, he cited an online survey of 1,012 people by Navigator Research, a pollster that works with Democratic and progressive clients.

Their poll question asked, "Do you approve or disapprove of Donald Trump’s decision NOT to wear a face mask while in public?"

This poll was conducted using an opt-in system, with respondents volunteering to participate. However, the data was weighted for "a variety of demographic variables" to approximate the national registered voter population, the firm said.

A look at other polls using a variety of survey methods found similar results when asking whether Trump should wear a mask in public.

The Navigator poll stands out because it asked people whether they approved of Trump’s decision, while other polls asked about masks without mentioning his behavior. Still, the results were comparable.

Here's what they found:

The Quinnipiac and Kaiser polls used phone calls, while the HuffPost/YouGov and Politico/Morning Consult polls were online.

The most obvious divergence of views comes from partisan identification.

While these surveys consistently show overall support for Trump wearing a mask, Republicans are far less enthusiastic. Here’s the amount of support for the idea from Republicans in each poll:

The HuffPost/YouGov gave respondents the option to answer "I don’t care either way," which was the most common answer among Republicans and Trump voters.

So, among these four polls, support for Trump wearing a mask ranges between 63% and 72% among all types of voters, but it drops to between 38% and 58% among Republicans. And the Navigation Research poll found that 54% of Republicans approve of Trump’s decision not to wear a mask.

Jackson said "two-thirds of Americans disapprove of Donald Trump not wearing a face mask in public and the vast majority supports elected officials being required to wear masks in government buildings."

In each of five polls, between 63% and 72% of all respondents said Trump should wear a mask. We rate the claim True.

Poll by Global Strategy Group’s Navigator Research conducted between May 21-May 25, 2020.

Poll by Politico and Morning Consult conducted between May 8-May 10, 2020.

Poll by Kaiser Family Foundation conducted between May 13-May 18, 2020.