Heidi Heitkamp
stated on February 24, 2019 in a roundtable on ABC's "This Week":
"We have record bankruptcies in farming country."

President Donald Trump’s re-election prospects for 2020 may depend on how well the economy is performing a year from now. A former Democratic senator from North Dakota says warning signs from farm country don’t bode well for him.

On ABC’s This Week, Heidi Heitkamp said the economy is starting to show weak spots.

"One of the leading indicators in the economy is agriculture," she said. "We have record bankruptcies in farming country."

Are there really "record bankruptcies in farming country"?

We found that the farm bankruptcy rate is exceeding historical norms in the upper Midwest, which includes Heitkamp’s home state of North Dakota. But experts told us the term "farming country" has no official definition, making the national picture the most relevant measurement.

And nationally, the farm bankruptcy rate has been fairly steady, and in fact sits well below the highs of just a few years ago.

What are farm bankruptcies?

Farmers can actually file under four possible chapters of the bankruptcy code, said Robert Dinterman, a researcher with Ohio State University’s Department of Agricultural, Environmental, and Development Economics. They are chapters 7, 11, 12, and 13.

Each variety of bankruptcy has its own parameters and requirements (here’s a breakdown from the trade publication AgWeek), but the chapter most commonly used to keep track of farm bankruptcies is chapter 12. That’s because it’s the only one that is exclusively reserved for farmers and fishermen. Court data does not distinguish between farm filings and non-farm filings under the other chapters, so it’s far more difficult to track the number of farm-specific bankruptcies under those chapters.

Chapter 12 bankruptcy was created in 1986 as a response to the worst farm crisis since the Great Depression, which had been caused by a mix of factors, including low commodity prices, high debt levels, high inflation, high gas prices, and a grain embargo against the Soviet Union.

Heitkamp’s office pointed us to a Federal Reserve Bank of Minneapolis report from Nov. 14, 2018, and a Wall Street Journal article from Feb. 6, 2019.

The Fed report found that over the 12 months ending in June 2018, the states comprising most of the bank’s region -- Minnesota, Montana, North and South Dakota plus parts of Wisconsin -- accounted for 84 farm bankruptcies under chapter 12, more than twice the level seen in June 2014 and a high going back to at least 2007. Here’s a chart from the report: 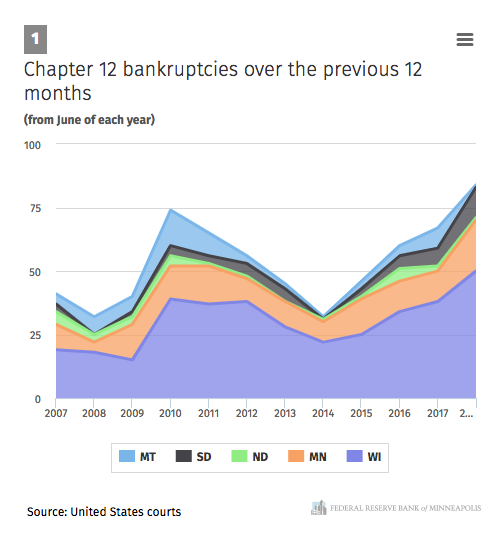 Facebook posts
stated on January 13, 2023 in a post
“MRNA vaccines are being injected into our food supply.”

Here’s the problem: The region stretching from North Dakota to Oklahoma, and from Utah to Indiana, may be facing higher levels of farm bankruptcies than at any point in the past decade or so. But these states are still just a portion of U.S. "farming country" -- for instance, two of the top three states in cash receipts for all commodities in 2017 were California and Texas, both of which are outside the region highlighted by these reports.

And the farm bankruptcy picture is different if you look at the nation as a whole.

Court data compiled by the American Farm Bureau Federation, a trade group, found that chapter 12 filings nationwide actually fell by about 1 percent in 2018, and that the 2018 level was below the 10-year average.

Court data compiled by Dinterman and Ani Katchova of Ohio State found that chapter 12 filings were higher for several years after the Great Recession than they are now, and were higher still around 2003. 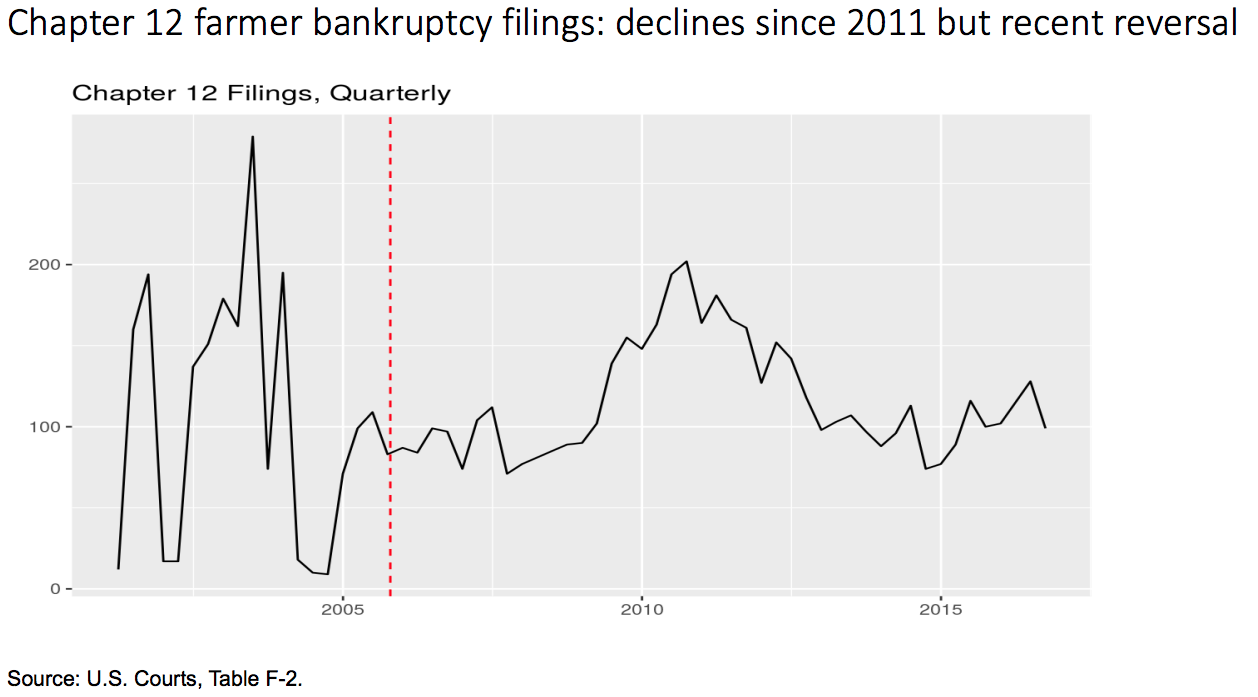 An even longer-term look published by Dinterman and Katchova shows that the bankruptcy rate was vastly higher during the 1980s farm crisis, although that peak is not directly comparable because it occurred before the advent of chapter 12. (In fact, the high rates of that era were the reason the law was passed in the first place.) 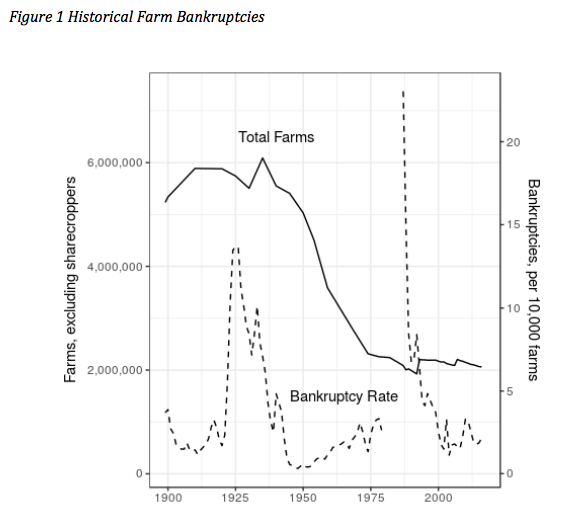 Despite the regional variations, the national farm bankruptcy rate is generally "stable," Dinterman told PolitiFact. "Nationally, we saw higher farm bankruptcies in the 2009 to 2012 period," he said.

There are other problems facing farmers beyond the bankruptcy numbers, according to the Farm Bureau, including heavier-than-normal debt loads. And Heitkamp’s office cited projections of declining farm profits made by the Agriculture Department in November 2018, which would put profits near their lowest level since 2002.

So there are certainly warning signs for farm country. But Heitkamp’s statement on This Week is overly broad.

Heitkamp said, "We have record bankruptcies in farming country."

In her backyard, the upper Midwest, farm bankruptcies have indeed reached their highest level in at least a decade. But nationally, farm bankruptcies are holding steady, perhaps even falling slightly, and they sit below the levels seen as recently as 2009 to 2012.

Federal Reserve Bank of Minneapolis, "Chapter 12 bankruptcies on the rise in the Ninth District," Nov. 14, 2018

Wall Street Journal, "‘This One Here Is Gonna Kick My Butt’—Farm Belt Bankruptcies Are Soaring," Feb. 6, 2019

Email interview with Paul Mitchell, professor of agricultural and applied economics at the University of Wisconsin, Feb. 25, 2019

Joe Biden
stated on February 3, 2023 a speech in Philadelphia:
“We created more new jobs in two years than any president did in their entire term.”