Shoppers prepare ahead of Hurricane Dorian at the Home Depot on Aug. 29, 2019, in Pembroke Pines, Fla. (AP)

As Hurricane Dorian bore down on Florida, Democrats accused President Donald Trump of taking money intended for natural disasters and using it instead for his priorities on the U.S.-Mexico border.

Several Democratic presidential candidates tweeted criticism of the administration’s move. One — South Bend, Ind., Mayor Pete Buttigieg — tweeted on Aug. 28, "Taking money Congress authorized to protect people facing disaster in order to indefinitely detain asylum seekers is unconscionable. It is unworthy of the presidency and unworthy of the United States."

Taking money Congress authorized to protect people facing disaster in order to indefinitely detain asylum seekers is unconscionable. It is unworthy of the presidency and unworthy of the United States. https://t.co/vHJYduZmMj

On the matter of removing money from disaster relief, Buttigieg’s description of what happened is correct. But he’s off-base in what he says about the money being used to "indefinitely" detain asylum seekers.

Where is the money coming from?

Facing an influx of asylum-seeking migrants at the U.S.-Mexico border, including many families from Central America, Trump has pursued a variety of measures designed to limit the migrants’ ability to make it into the United States and to remain in the country as they await their judicial hearings.

On July 26, 2019, the Department of Homeland Security announced that it was "reprogramming" some of the funds that Congress had allocated to the department.

All told, the department said it would transfer a total of $271 million toward immigration efforts.

About $112 million of this sum isn’t directly relevant for analyzing Buttigieg’s tweet, because it would be taken from the Coast Guard, the Transportation Security Administration, the Cybersecurity and Infrastructure Security Agency, DHS management accounts, and several other offices within DHS.

But the remaining $158.4 million would, as Buttigieg said, come from FEMA, the agency that handles disaster prevention and recovery.

Most of the FEMA money being reprogrammed to the border — $155 million — would come from the disaster relief fund base budget, which is spent on recovering from natural disasters. The remaining $3.4 million would be transferred from disaster mitigation, which includes grant funds that allow local jurisdictions susceptible to natural disasters to undertake infrastructure projects that limit future disaster risks.

It’s worth noting that the funding shift won’t decimate FEMA’s available funding for disaster-hit areas; the federal government has a process in place to provide disaster relief. But it could have some effect, depending on the severity of the storm season. 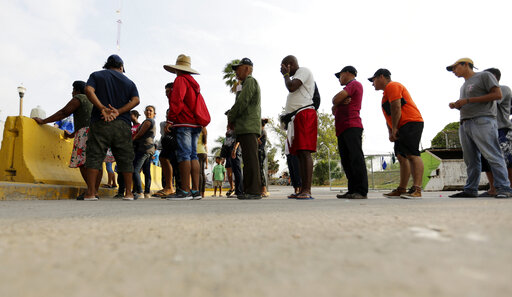 Migrants seeking asylum in the United States line up for a meal provided by volunteers near the international bridge in Matamoros, Mexico, on April 30, 2019. (AP)

Where is the money going?

DHS has earmarked the $271 million being sent to the border for two specific purposes.

One pot of money, worth $116 million (but only $3.4 million taken from FEMA accounts), would be used to pay for beds for adults who were detained and for transporting them to and from immigration hearings.

"These additional beds are required in order to manage the crisis at the Southwest border and expediently transfer aliens from overcrowded Border Patrol stations," DHS wrote. The remainder of this money would be spent on transportation — "the safe and secure transfer of migrants from the Border Patrol to ICE detention facilities" as well as transporting migrants to hearings with immigration judges.

Adam Laxalt
stated on November 20, 2022 in an ad
“Biden and Democrats have dismantled border security.”

The second pot of money the department would transfer came to $155 million. This would fund the construction of hearing facilities under the Migrant Protection Protocol, or MPP.

Under the Migrant Protection Protocols, "certain foreign individuals entering or seeking admission to the U.S. from Mexico – illegally or without proper documentation – may be returned to Mexico and wait outside of the U.S. for the duration of their immigration proceedings, where Mexico will provide them with all appropriate humanitarian protections for the duration of their stay."

This additional workload demanded new courtroom infrastructure, DHS said. "Current courts have infrastructure capacity and security limitations that are being exceeded by the addition of MPP cases to the existing non-detained docket," the department wrote.

Criticism of the shift

Rep. Lucille Roybal-Allard, D-Calif., who chairs the House Appropriations Subcommittee on Homeland Security, said she "strongly" disagreed with the department’s action. "DHS has ignored the negotiated agreement with Congress by vastly exceeding the amount appropriated for immigration enforcement and removal operations," she wrote.

And Steve Ellis, executive vice president of Taxpayers for Common Sense, said the shift amounted to "robbing Peter to pay Paul." He added that "much of the major disaster funding is already targeted to previous disasters, such as Maria which savaged Puerto Rico in 2017."

The Trump campaign countered that Obama did something similar during a previous border crisis in 2014 and that Democrats have known about this decision for a month and only decided to complain with a hurricane approaching "to score political points." (Craig Fugate, the FEMA administrator under Obama, told NPR that the part about Obama using a similar maneuver was accurate.)

Overall, though, Buttigieg is correct to say that Trump has taken "money Congress authorized to protect people facing disaster" for other purposes.

However, Buttigieg conflates the situation with the second part of his assertion – that the money taken from FEMA will be used "to indefinitely detain asylum seekers."

Buttigieg’s notion isn’t conjured from whole cloth. The Trump administration has pursued a policy of directing immigration judges not to allow migrants to be released on bail after they have established "a credible fear of persecution or torture" in the home country. The Trump administration decision overturned a policy that had been in place since 2005, and given backlogs, it could lead to months or years of detention until their cases are heard.

However, the Trump administration policy change was blocked by a federal judge in Seattle. The legal battle is continuing.

It’s also worth noting that, given how DHS divvied up the transferred money, just a small fraction of the money taken from FEMA — about 2 percent — would go toward detainee housing and transportation that could be considered the "indefinite detention" Buttigieg cited.

The other 98 percent of the money taken from FEMA would go toward building hearing facilities for individuals who are to be kept in Mexico while awaiting their proceedings. It’s a stretch to call that money spent on indefinitely detaining migrants. In theory, faster hearings would end indefinite detention, not encourage it.

"It is not exactly right to say that the money was reprogrammed for ‘indefinite’ detention," said Denise L. Gilman, director of the immigration clinic and a clinical professor at the University of Texas-Austin Law School. A more accurate statement would be that "the $3.4 million is being reprogrammed to fund ‘expanded and prolonged’ detention of asylum seekers."

The Buttigieg campaign said it stood by the candidate’s tweet, citing the administration’s opposition to the judge’s ruling and its assertion that that the money is needed to fix shortages caused by its own policies.

Email interview with Denise L. Gilman, director of the immigration clinic and a clinical professor at the University of Texas-Austin Law School, Aug. 30, 2019