Stony Rushing is one of 10 Republican candidates running for the open seat in North Carolina's 9th Congressional District. He says he's not afraid to go the Washington D.C. "swamp" and drain it.

In a field of 10 candidates, Stony Rushing has gone to creative lengths to stand out.

Rushing, a Union County commissioner, must beat out nine other Republicans to be the party’s candidate in a special election for North Carolina’s 9th Congressional District. (The NC elections board nullified the November election results after finding they were tainted by an operative working for Republican candidate Mark Harris.)

Rushing, a Wingate resident who once dressed as the corrupt Boss Hogg character from "The Dukes of Hazzard" show, initially gained attention by earning Harris’ endorsement in the wake of the probe. Rushing has since appeared in a campaign ad with a snake wrapped around his neck, and challenged the sincerity of his opponents.

Some candidates, Rushing said recently, are far apart from voters not only in philosophy — but geography.

"In a crowded field of candidates where 5 out of 10 (candidates) do not live or vote in the 9th District, only Stony Rushing is still fighting for your vote to matter," the Rushing campaign said in an April 9 Facebook post.

The race includes 13 total candidates: 10 Republicans, a Democrat, a Libertarian and a Green Party candidate. Rushing’s Facebook post linked to a story about a debate between the Republican candidates, so it’s clear Rushing was referring to GOP candidates.

To run for U.S. House, the law doesn’t require candidates to live in a specific district, as PolitiFact has previously reported. (The Constitution says House members must live in the state they represent, however.)

Rushing, for his part, raised the issue because he thinks candidates who live in the district have a better understanding of its needs than those who don’t.

The 9th district covers more ground than some of North Carolina’s 12 other congressional districts, stretching across eight counties from Charlotte to Fayetteville and encompassing about 770,000 people.

Conrad Pogorzelski, Rushing’s spokesman, said the district includes a large swath of NC’s banking industry in Charlotte, military personnel near Fayetteville and agriculture in between.

So we wondered about Rushing’s claim. As it turns out, he’s right.

When reached by PolitiFact, Rushing spokesman Pogorzelski cited the addresses candidates filedwith the NC elections board. To find out which congressional district each candidate lives in, we plugged each address into the elections board’s "voter lookup" tool.

Matthew Ridenhour and Dan Bishop of Charlotte, as well as Gary Dunn of Matthews and Fern Shubert of Marshville, all live in the district with Rushing. (So do Democrat Dan McCready, Green Party candidate Allen Smith and Libertarian candidate Jeff Scott.)

The following candidates live outside the district: 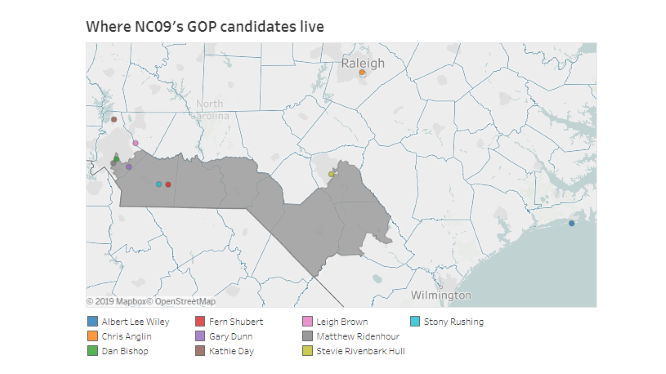 Brown, Day and Hull live near the district, while Anglin and Wiley are the farthest away.

Wiley lives in the 3rd district, which sprawls down North Carolina’s coast, where there’s a separate special election.

In the 3rd district, longtime Rep. Walter Jones died earlier this year and 26 candidates filed to run for his seat, including 17 Republicans. Three of those Republicans — Graham Boyd of Wake Forest, Jeff Moore of Raleigh and Francis De Luca of Cary — live outside the district. So do Democrat Ernest Reeves and Libertarian Shannon Bray.

Rushing said five of the 10 Republican candidates in North Carolina’s 9th Congressional District live outside the district boundaries. North Carolinians by law aren’t prohibited from running in a congressional district that’s not their own. And some of the candidates who reside outside the district live nearby. But, Rushing is right. We rate this claim True. 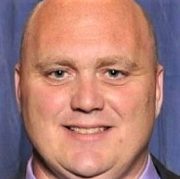 North Carolina elections board list of addresses of candidates in North Carolina’s 9th Congressional District race, and the voter lookup tool on ncsbe.gov.