Larry Kudlow
stated on June 29, 2018 in an interview with Fox Business Network:
"The deficit ... is coming down, and it’s coming down rapidly."

Larry Kudlow, director of the National Economic Council for President Donald Trump, raised eyebrows when he said in a Fox Business Network interview that the nation’s deficit is falling on Trump’s watch.

The economy under President Donald Trump, Kudlow said on June 29, "is throwing out enormous amounts of new tax revenues. As the economy gears up, more people working, better jobs and careers -- those revenues come rolling in, and the deficit, which is one of the other criticisms (of Trump’s economic policy), is coming down, and it’s coming down rapidly. Growth solves a lot of problems."

.@larry_kudlow: "The deficit... is coming down, and it's coming down rapidly. Growth solves a lot of problems." pic.twitter.com/H375h7rV0a

As it happens, the deficit hasn’t come down to date -- which sparked a quick backlash on social media and prompted Kudlow to amend his remarks later that day. Kudlow told the Washington Post that "the economy is so strong right now it’s going to produce lower deficits. I probably should have said future deficits."

However, that assertion is questionable as well. The most trusted source for future budget projections, the Congressional Budget Office, shows rising deficits for years into the future.

The deficit so far under Trump

In fiscal year 2015, when Barack Obama was president, the federal deficit was $438 billion. (A refresher: The deficit refers to federal revenues minus federal outlays. Each year’s deficit adds to the overall public debt.)

In fiscal year 2017, which was about two-thirds on Trump’s watch, the deficit rose to $665 billion.

So on a full-year basis, Kudlow is wrong.

The future course of the deficit

As for the future, CBO finds no reason to expect the deficit to go down any time soon.

Here’s the full chart from CBO’s most recent projections, released in April. 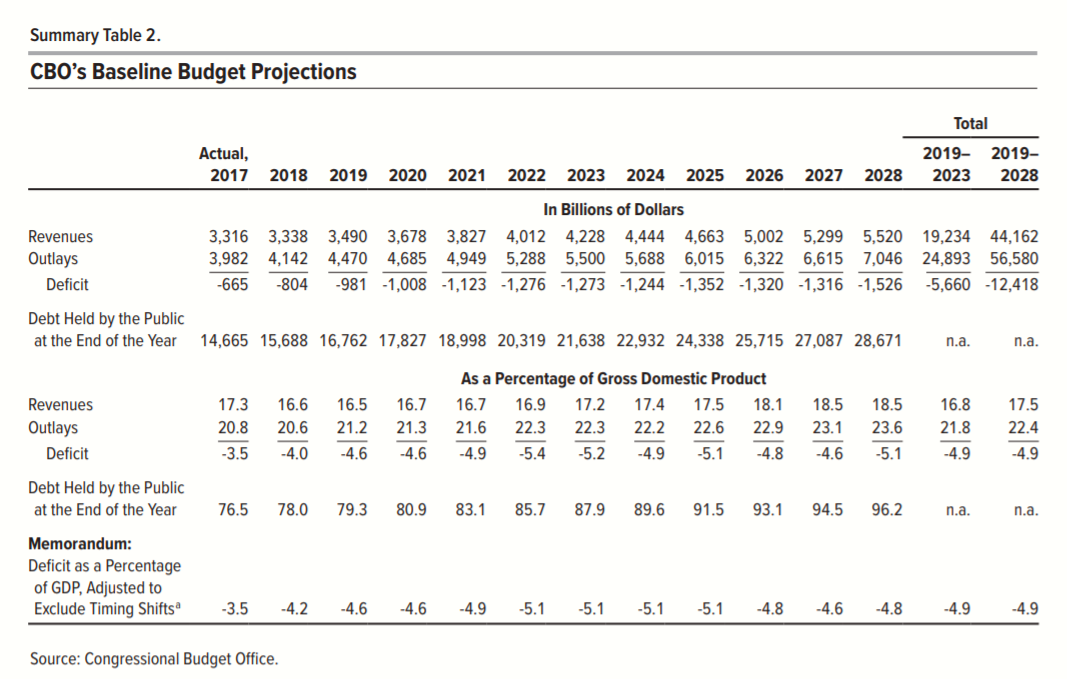 Not only that, but CBO specifically cited the tax cut Trump backed and signed into law as a reason for spiraling deficits.

"The deficit that CBO now estimates for 2018 is $242 billion larger than the one that it projected for that year in June 2017," CBO wrote in its April report. "Accounting for most of that difference is a $194 billion reduction in projected revenues, mainly because the 2017 tax act is expected to reduce collections of individual and corporate income taxes."

And the projections would be even worse if Congress doesn’t allow the recent round of tax cuts to expire. "In that scenario, far larger deficits and much greater debt would result than in CBO’s baseline projections for the 2019–2028 period," CBO wrote.

Kudlow said, "The deficit ... is coming down, and it’s coming down rapidly." After being criticized, he later clarified that he "probably should have said future deficits."

Kudlow’s first formulation is wrong, and his revised version isn’t supported by the most widely trusted barometer -- projections by the CBO. Trump tax bill, which dramatically cut revenues, is a big reason why. 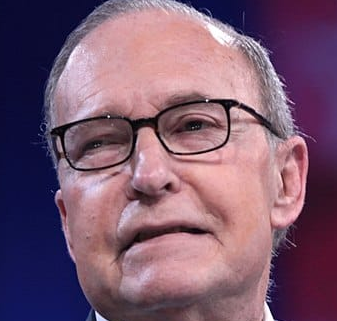 Treasury Department, "Monthly Treasury Statement of Receipts and Outlays of the United States Government For Fiscal Year 2018 Through April 30, 2018"

Committee for a Responsible Federal Budget, "The Deficit Is Not "Coming Down Rapidly," June 29, 2018

Email interview with Patrick Newton, spokesman for the Center for a Responsible Federal Budget, July 2, 2018