Snapple
stated on April 5, 2018 in a bottle cap:
"There are only 18 minutes of total action in an average baseball game."

With the new major league season under way, we thought we’d take a break from fact-checking trade wars and immigration disputes and turn our gaze toward greener pastures.

Our subject: A self-styled "real fact" printed on the underside of a Snapple bottle cap. The drink company puts hundreds of bits of trivia on its bottle caps on a rotating basis.

This bottle cap said, "There are only 18 minutes of total action in an average baseball game." (As it happens, Snapple just inked a partnership with Major League Baseball.) 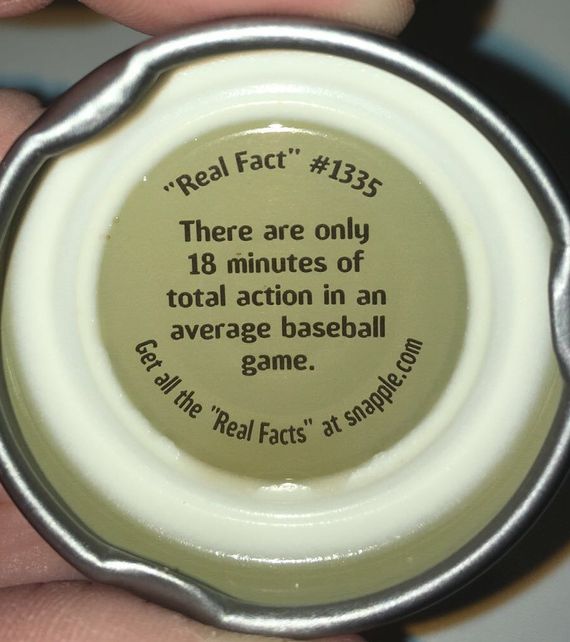 Let’s acknowledge — ahem — right off the bat that not everyone agrees that this is an enlightening factoid.

"I have seen such numbers attributed to various sports, including baseball, but I never delved further, as this seems a singularly stupid calculation, as if baseball in particular were a sport of more or less continuous action, like soccer or hockey or basketball," Major League Baseball’s official historian, John Thorn, told PolitiFact.

That said, the statistic appears to come from a study published by the Wall Street Journal in 2013. The author and study designer, Steve Moyer, had a long career in baseball statistics before his death on March 1.

Based on a sampling of three games that he painstakingly stopwatched and coded, Moyer found that, on average, "a baseball fan will see 17 minutes and 58 seconds of action over the course of a three-hour game. This is roughly the equivalent of a TED Talk, a Broadway intermission or the missing section of the Watergate tapes."

Moyer counted two types of action that together totaled 17 minutes and 58 seconds:

• Other action (such as pitches, foul balls and pickoffs): 12 minutes, 11 seconds

In addition, Moyer broke down different types of inaction.

But easily the biggest chunk of dead time was time between pitches (one hour, 14 minutes, 49 seconds).

This, Moyer explained, "includes the unstrapping and re-strapping the batting gloves, sleeve adjusting, helmet adjusting, practice swings, plus the pitcher doing whatever it is he does as well. … Sometimes the pitcher will walk around or pick up the rosin bag, sometimes more than one sign will be necessary, sometimes the batter calls time and the whole process starts over."

Because stopwatching an entire ballgame -- much less several of them -- is taxing, the experiment hasn’t been done very often, so it’s hard to know if the sample of games is skewed in some way.

We found one additional study by Fox Sports that looked at a pair of major league games in 2010. Fox Sports found 14 minutes of action -- not precisely the same as what the Journal found, but an amount that was "in the ballpark," Grant Brisbee, who writes on baseball for the sports site SB Nation, told PolitiFact. (Yes, Grant, we got the pun.)

We contacted Brisbee because he had taken his own look at a related question for SB Nation in 2017. Brisbee was trying to puzzle out the main reason why major league games have become so long in recent years.

Time has become an increasing issue for baseball, a sport that is famously not run according to a clock.

In recent years, major league games have run longer and longer. In 2017, the average length of games hit a full-season record of three hours, five minutes.

Using data from baseball-reference.com, we plotted out the inexorably lengthening duration of the average major league game, from a little over two hours right after World War II to a little over three hours today.

As a result, time has become a serious concern at Major League Baseball headquarters. For 2018, officials instituted several new rules that were designed to speed up the game, including a limit on the number of visits that managers, coaches or players can visit the mound every nine innings, and changes designed to speed up video reviews of umpires’ calls.

Officials also kept in place rules that had been enacted in recent years, such as limits on when players can leave the batter’s box between pitches, and on how quickly pitchers have to get ready between innings. (A pitch clock -- now being used in some minor leagues -- was considered, but deferred.)

So, back to Brisbee’s question: Why are major league games getting longer?

Going into the project, Brisbee figured that commercials -- primarily between-inning time -- would account for the longer game time. As it turned out, he did find an increase, but it wasn’t dramatic.

Instead, the culprit was the time between pitches, Brisbee found. He zeroed in on what he called "inaction pitches" -- balls, called strikes, or missed swinging strikes that didn’t result in the end of an at-bat or the advancement of a runner.

It’s worth noting that there is technically a rule to curb this — and there has been for more than a century. "Since 1901, baseball has mandated that a pitcher must deliver the ball to a batter within 20 seconds after receiving it from the catcher," Moyer noted in his study.

But ask any baseball fan if they’ve ever seen that rule enforced and the answer will surely be no.

Of course, long games can have their charms

"My perspective is that something is always happening in baseball even when the action on the field has come to a stop," said Thorn, the historian. "Indeed it is the interstices between plays that to me are most valuable, as they permit conversation or reflection."

The Snapple cap said, "There are only 18 minutes of total action in an average baseball game."

One credible study found just shy of 18 minutes of action, while another study was close, finding 14 minutes. That said, the number of stopwatched games is low due to the difficulty of the task -- only a half-dozen or so that we could find -- meaning that it’s hard to rule out a skewed statistical sample. So we’ll be cautious and rate the statement Mostly True.

PolitiFact Rating:
Mostly True
"There are only 18 minutes of total action in an average baseball game."
Snapple
beverage