Kevin Brady
stated on November 26, 2017 in an interview with Fox News' Maria Bartiromo:
In the House Republican bill, "70 percent of the tax relief goes to those families making less than 200,000."

As crunch time in Congress approaches, Republicans are aggressively making the case that their tax bills will allow a broad swath of Americans to benefit.

During a recent interview with Fox News’ Maria Bartiromo, Rep. Kevin Brady, R-Texas -- the chairman of the tax-writing House Ways and Means Committee -- said that "70 percent of the tax relief goes to those families making less than 200,000."

When we took a closer look, we found Brady’s statistic to be somewhat misleading.

The Joint Committee on Taxation study

Brady's office pointed us to an analysis of the House bill by the Joint Committee on Taxation, the nonpartisan office of Congress charged with analyzing the impacts of tax bills.

The committee released breakdowns of how much various income ranges would see their taxes collectively increase or decrease over the next decade. Because one of the divisions between income groups is at $200,000, it’s straightforward to break down what share of the benefits accrue above and below that income level.

Brady’s office pointed us to one chart in particular. It shows the breakdown of gains on the income tax side of the proposal. Those below the $200,000 threshold get 69 percent of the benefits, while those above $200,000 get 31 percent. 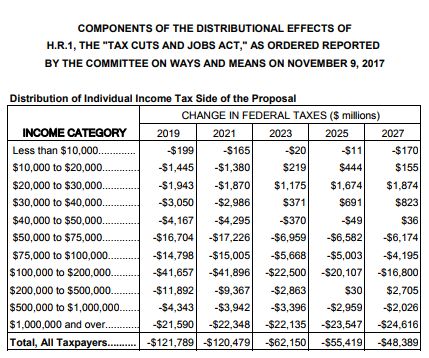 That’s in line with what Brady said -- but the talking point is cherry-picked.

The bigger issue concerns what kinds of income are counted in the chart Brady used.

As we’ve found in a previous fact-check, the chart Brady used addresses just the personal income tax changes in the bill. However, the bill would not only change personal income taxes; it would also change how other types of taxes are levied, including corporate and estate taxes.

"A big part of the bill is slashing taxes on business income, which disproportionately affects high-income earners, as does eventually repealing estate tax," Len Burman, a co-founder of the Urban Institute-Brookings Institution Tax Policy Center, has told us.

These taxes are not factored into the personal-taxes-only data that Brady cited, so the chart he used underplays the positive impact the bill as a whole would have on wealthy households.

As it happens, the same Joint Committee on Taxation assessment does analyze all aspects of the bill. We calculated the percentage of the total benefits going to those above and below $200,000 in income and summarized them here:

For each year, the percentages taken by the under-$200,000 households are lower than Brady’s 70 percent figure. But they are always a majority.

Calculations from the Tax Policy Center show an even smaller share of benefits flowing to under-$200,000 households. That’s because the Joint Committee on Taxation does not include the benefits associated with eliminating the estate tax, and because the two groups use slightly different definitions of "income."

The Tax Policy Center found that households below $200,000 in income would get about 54 percent of the House bill’s benefits. That percentage would shrink to about 31 percent by 2027.

Brady said that in the House Republican bill, "70 percent of the tax relief goes to those families making less than 200,000."

That’s only accurate if you look at the individual income tax portions of the House bill. Once you factor in tax changes related to business income, which tend to benefit wealthier taxpayers, the share earned by those under $200,000 is actually 58 percent in 2019, falling to 50 percent in 2027. And if you factor in the impact of the estate tax, it would be as low as 54 percent initially and 31 percent by 2027.

PolitiFact Rating:
Half True
In the House Republican bill, "70 percent of the tax relief goes to those families making less than 200,000."
Kevin Brady
U.S. House of Representatives, R-Texas
https://www.youtube.com/watch?v=Rc912t-8hLs

Joint Committee on Taxation, "Distributional Effects Of H.R.1, The "Tax Cuts And Jobs Act," As Ordered Reported By The Committee On Ways And Means On November 9, 2017"

Email interview with Gary McGill, director of the Fisher School of Accounting at the University of Florida, Nov. 29, 2017