Rick Kriseman
stated on June 15, 2017 in during a Q&A with reporters inside City Hall:
"We are seeing poverty being reduced in south St. Pete at a number larger than the national average, the state average, county or Tampa and Jacksonville."

St. Petersburg Mayor Rick Kriseman (right) stands up on a bench as he greets customers and supporters while talking about the stakes in the election during a campaign style stop at Cycle Brewing in St. Petersburg on June 6. (DIRK SHADD | Tampa Bay Times)

Mayor Rick Kriseman is trying to win over voters in his reelection bid with a pitch about falling poverty in a lower income neighborhood.

Kriseman, who faces former Mayor Rick Baker, says significant strides have been made since he took office, particularly in south St. Petersburg.

"We are seeing poverty being reduced in south St. Pete at a number larger than the national average, the state average, county or in Tampa, Jacksonville," Kriseman said after signing his qualifying papers inside City Hall.

This area of town is significant to Kriseman, who helped with efforts related to the 2020 plan, a five-year plan to reduce poverty by 30 percent in a portion of south St. Petersburg.

This isn’t the first time Kriseman has made this point, so we decided to find out if poverty really is going down in south St. Petersburg.

Kriseman’s data is about population, not geography

In order for this claim to be true, the poverty rate in south St. Petersburg would have to be dropping faster than in those other areas he named.

But Kriseman’s evidence for the claim is imprecise.

Instead of providing data for that area, Kriseman pinpointed the poverty rate of the African-American population in the entire city of St. Petersburg between two years.

Kriseman’s staff relied on a 2013 Pinellas County report that highlighted south St. Petersburg as one of five at-risk communities, areas marked by "high concentrations of poverty and a small return to the taxbase."

So to support his claim, Kriseman compared the poverty rate for the entire St. Petersburg black population (which should go without saying, does not entirely live in south St. Pete) against the rates of other big cities, the state and the country.

Even with that allowance, the numbers don’t hold up.

Kriseman’s team sent PolitiFact Florida two sets of data from the Census Bureau’s 2014 and 2015 American Community Survey for the African-American population. (The 2016 numbers will not be released until September.)

The other areas Kriseman mentioned — Pinellas County, Jacksonville, Florida, the United States, and Tampa — showed a smaller reduction in the black poverty rate, between a drop of 4.8 percentage points to a gain of .2 point, respectively.

(The numbers listed on the graph represent percentage points — not the percentage.) 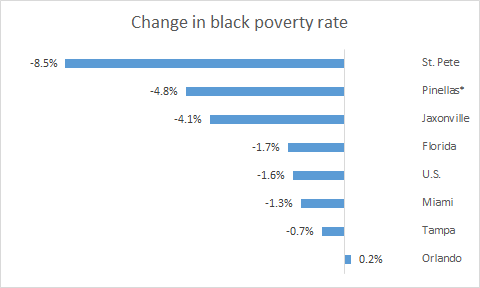 This data may look convincing, but it's not as certain as Kriseman describes.

Most importantly, the data neglects the large margin of error in census data.

Based on our calculations, the difference in the number of African-Americans in poverty — for St. Petersburg as well as the other locations — was statistically unchanged from 2014 to 2015.

In other words, there's no way to know for sure if poverty went up or down, because the change in the poverty rate is within the margin of error.

Taken together, the estimates show that the number of African-Americans in poverty could have held steady, or even increased from 17,000 to 20,000. We just don't know with a margin of error this wide. 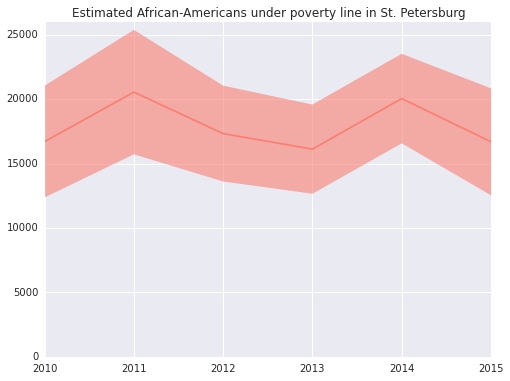 Joshua Wilde, an assistant professor of economics at the University of South Florida, said Kriseman was using the best data available despite its imperfections. While he couldn't say this for sure, he said there was a strong chance that poverty fell in south St. Petersburg among African-Americans between 2014-15. He calculated the p-value —  a statistical indicator based on the confidence interval — to determine the chance poverty fell based on numbers provided by the Census Bureau.

"Once you peel back the layers of the onion on the numbers, it turns out the best numbers we have are just highly uncertain," he said.

Still, Melissa Radey, a Florida State University professor who specializes in poverty research and data, said it would be better to have more years when looking at trends in poverty.

"Making statements about trends is not appropriate with only two years of data," Radey said.

Even looking at additional years for those locations, there really is no takeaway trend.

Kriseman stuck by his conclusion despite the uncertainty in the numbers.

"To dismiss the year over year Census report about the number of people in poverty as statistically insignificant overgeneralizes the complexities of real-time poverty eradication," he said.

He cited a 2016 Tampa Bay Times article that highlighted Census Bureau data that showed that overall poverty rates in the Tampa Bay area have dropped to their lowest levels since the Great Recession. More specifically, the article said that poverty among African-Americans in Pinellas County dropped significantly from 2014-15.

The article, however, did not specifically look at the south St. Petersburg population.

Kriseman said, "We are seeing poverty being reduced in south St. Pete at a number larger than the national average, the state average, county or Tampa and Jacksonville."

The statement is flawed from the start. To support his claim about south St. Petersburg — which is not entirely comprised of black residents — Kriseman referred to data about the city's overall black population, not even narrowed down to the south side.

That data has problems. At face value, 2014 Census data showed a decrease in the poverty rate for the city’s African-American population through 2015. But that ignores critical facts, including the wide margin of error for Census city data that indicates there is no discernible difference between the years Kriseman highlighted. A more comprehensive look at five years of data does not show a strong trend either way.

For a statement that contains an element of truth but ignores critical facts that would give the reader a different impression, we rate this claim Mostly False.

PolitiFact Rating:
Mostly False
"We are seeing poverty being reduced in south St. Pete at a number larger than the national average, the state average, county or Tampa and Jacksonville."
Rick Kriseman
St. Petersburg Mayor

Report, "Update on The Economic Impact of Poverty Report for the Pinellas County Board of County Commissioners," October 2013