Israeli Prime Minister Benjamin Netanyahu warned of the danger to his country from Iranian ballistic missiles in his first joint news conference with President Donald Trump.

Israel has been firmly opposed to the United States-Iran nuclear agreement even before it was signed during the Obama administration. Trump was often critical of the deal on the campaign trail.

Two weeks before the Feb. 15 news conference, Iran tested a medium-range ballistic missile that could theoretically reach Israel, as well as many other targets in the region. The Trump administration considers Iran’s Jan. 29 test to be against the terms of the agreement, while Iran considers it permissible. Days later, the Trump administration announced new sanctions on Iran, specifically citing the missile test as the reason.

At the news conference, Netanyahu said his goal, and Trump’s, is to prevent Iran from getting nuclear weapons.

A reader asked us to check what Netanyahu said about the Hebrew lettering. So we took a closer look.

The Israeli Embassy in Washington did not reply to an inquiry, but we found news reports from March 2016, such as this one in the Times of Israel, that discussed such an incident. The claim was sourced to the Fars news service, which has been described as a "semi-official" organ of the Iranian government.

We tracked down the Fars article, dated March 9, 2016. It said that the the Islamic Revolutionary Guard Corps had successfully launched two "Qadr H" ballistic missiles at a target in southeastern Iran 1,400 kilometers away. It described the Qadr as a liquid-fueled ballistic missile that "can reach territories as far as Israel." (The Obama administration condemned the test.)

"One missile," the Fars post said, "had a message written on it that said in Hebrew, ‘Israel should be wiped off the Earth.’ "

The English-language version of the Fars site didn’t include the exact words, but the Times of Israel article showed a screenshot of the Farsi-language page, which specifies the Hebrew phrase "Yisrael Tsricha LeHimachek Me’Al." 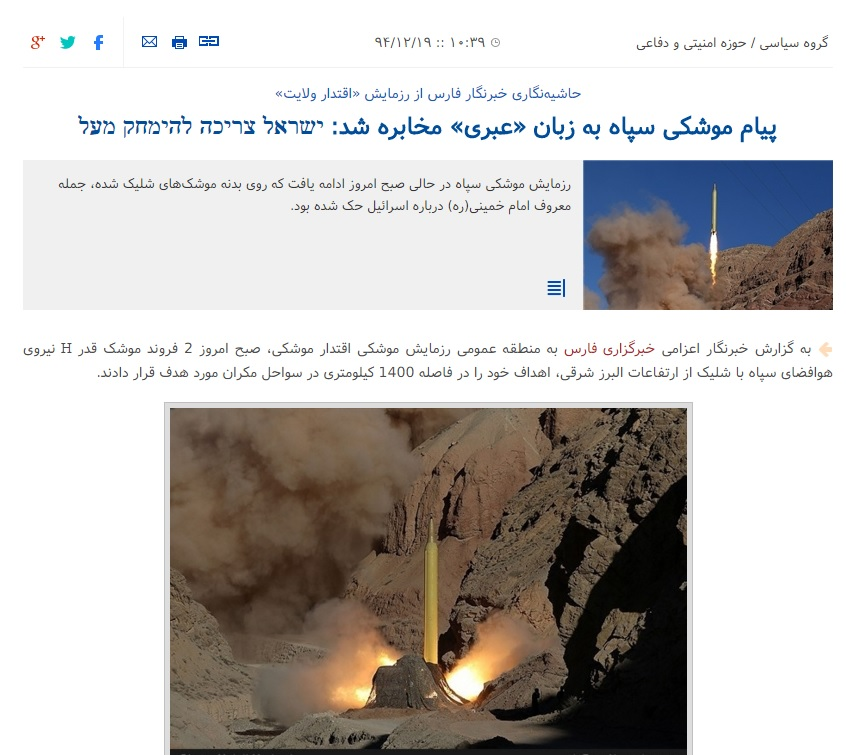 The Times of Israel noted dryly that "the words mean ‘Israel must be wiped out from.’ Apparently, Iran’s Hebrew writers intended to complete the phrase with something to the effect of ‘the face of the Earth’ but messed up their translation."

The translation of the Hebrew in the Times of Israel article is accurate, said Michael J. Koplow, policy director of the Israel Policy Forum, a group that advocates for a negotiated two-state solution between Israelis and Palestinians.

Koplow and other experts said they see no reason to doubt the accuracy of the Fars post.

"This story has the ring of truth to it because I do not see why Iran would lie about it," said Michael M. Gunter, a Tennessee Technological University political scientist who studies the region.

We won’t quibble over the exact wording, which Netanyahu got wrong but which conveys the same message. But we will raise one caveat.

Hearing Netanyahu’s comments, one could assume that he’s talking about the most recent missile tests from January 2017, rather than the ones from 2016. Not only did his comment about the Hebrew lettering immediately follow a mention of the most recent tests, but he used the present tense to say that "these ballistic missiles are inscribed in Hebrew."

We found no evidence that the most recent round of tests included missiles with threats written in Hebrew letters.

"It is striking to me that Prime Minister Netanyahu must go back to an Iranian report of a March 2016 ballistic missile test to make his point about malign Iranian intentions," said Greg Thielmann, a former foreign service officer and Senate Intelligence Committee staffer who is now a board member at the Arms Control Association.

He suggested that the Hebrew lettering may have been "a one-time event, and not necessarily authorized in Tehran." The botching of the text may suggest that the gambit was ad-hoc "sloganeering" by the Islamic Revolutionary Guard Corps, "rather than an explicit policy dictated from the top," Thielmann said.

Netanyahu said, "President Trump has led a very important effort in the past few weeks, just coming into the presidency. He pointed out there are violations -- Iranian violations on ballistic missile tests. By the way, these ballistic missiles are inscribed in Hebrew, ‘Israel must be destroyed.’ "

He’s right that there was such an incident (with slightly different wording) during an Iranian ballistic missile launch in 2016. However, it’s worth noting that, despite Netanyahu’s implication, there is no evidence of a repeat when Iran undertook its most recent test in 2017. We rate the statement Mostly True.

Email interview with Greg Thielmann, board member at the Arms Control Association, Feb. 15, 2017