If you’ve seen the viral video of a giant alligator strolling across a Florida golf course, then you’ve probably had the same reaction we did:

Can that be real?

The video, originally posted by Charles Helms on his Facebook page Wednesday, May 25, shows a large alligator meandering across the fairway at Buffalo Creek Golf Course in Palmetto. The alligator is so big (some have estimated it to be around 15 feet), one of the watchers suspected it might be "two guys in an alligator suit."

"I didn't know if we were being punked or something," Helms later told reporters.

Helms’ video has since traveled the globe with similar expressions of shock and disbelief. It has been picked up by several news outlets including Golf.com, Time and The Guardian. The video posted on Golf.com’s YouTube account has 6.1 million views as of this writing. Someone even mashed up Helms’ video with scenes from Jurassic Park.

So, is it real? We went to the Manatee County golf course to find out.

Powell said the video -- and the gator -- are indeed real. Powell, who moved to Florida five years ago, said the gator can most often be found roaming around holes 3, 8 and 14. You might see him several days in a row, or not at all for weeks, Powell said.

"He could be there," Powell said. "He could not. You’re never going to know."

He offered us a ride on a golf cart to try and spot the elusive beast. 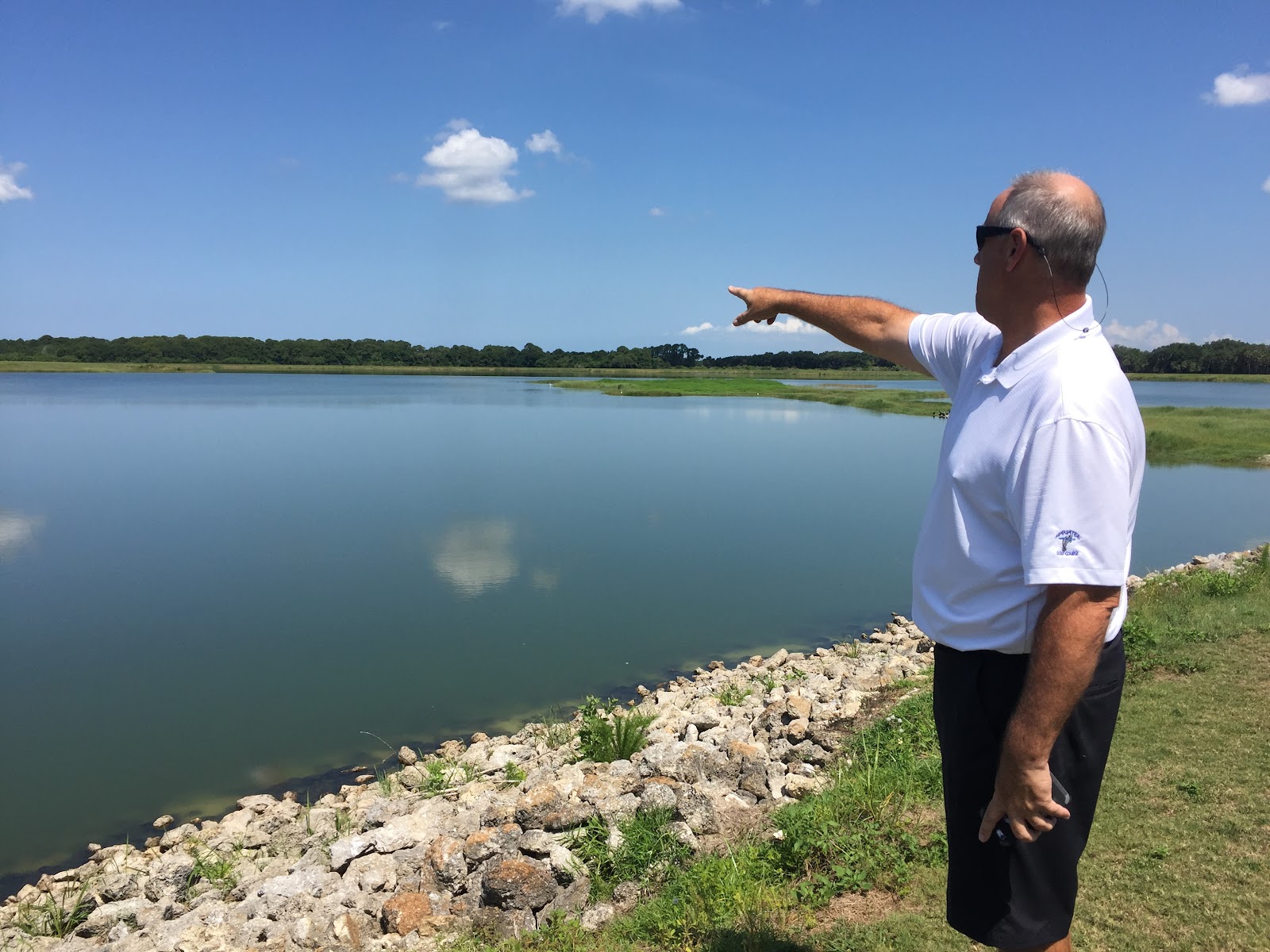 Ken Powell points to the reservoir where the alligator is often seen. (Photo by Allison Graves)

As we traveled along the edges of the bodies of water, we kept our eyes peeled for alligators of any kind, and especially for the ragged back of the now-famous reptile poking out of the water. Powell pointed out where he’s seen the gator and noted that it often follows a path, from a creek near Hole 8 to the lake.

Sometimes, the alligator hides in the nearby black culvert pipe feeding into the lake, Powell said. We opted not to poke our head in.

The 150-acre golf course is home to many wildlife species and plant life. Powell estimates there are around 37 bird species and more than 150 plant and tree species. The golf course is open every day except Christmas, open to the public and costs about $25 to play in the summer.

Estimates of the gator’s length vary. Helms told ABC Action News in Tampa that it was around 14- to 15-feet long. According to the Florida Fish and Wildlife Conservation Commission, the Florida record for a gator is 14 feet, 3.5 inches.

We drove around the 8th hole and to the 3rd and the 14th. No gator. We stared off into the lake looking for him, but we only saw a pack of vultures and a few unique birds that hung out near the water holes.

Cool. But not what we were after.

After a thorough search, no luck.

Powell showed a video he took from a different perspective, which shows the gator crossing a golf cart path, which he said is around 6 feet. He said the gator's tail was around 7 to 8 feet in total, and the entire gator could be double the length of the tail.

Powell said he doesn’t want to get any closer to say for certain. He also added that the golf course may have a contest to name the alligator.

Frank Mazzotti, a professor and investigator for "The Croc Docs" at the University of Florida, said that a large Florida gator would typically stretch 10 to 12 feet. In his estimation from watching Helms’ video, Mazzotti said the gator was around 12 to 14 feet long. He said he doesn’t think it meets record size.

Mazzotti also noted that the angle of the image could significantly alter how one measures it.

Countering disbelievers arguing that the alligator is not real, Mazzotti pointed to its gait — a "high walk" — as characteristic of a large gator.

"An alligator moving from pond to pond — large alligators will typically engage in that behavior," he said. "They will get up in all fours and walk in what I would call a stately fashion for an alligator, just dragging its tail a bit."

Saddened not to see the mammoth gator, we prepared our goodbyes to Powell and thought about our drive home.

Then, on our way out, right in front of the golf course, we spotted a darkish tail sitting in a shallow pond. Could it be? Could we have found it?

As we inspected the water, the alligator outline became clear. We grabbed our phones, readied our camera.

But it was just 2 feet long or so. Nothing worth writing about.

Bloggers went crazy over a viral video of a massive alligator on a Manatee County golf course, with many expressing skepticism about the video’s authenticity.

After speaking with the course’s regional manager and a University of Florida gator expert (and seeing additional video of the gator), we can say this video holds up.

We rate this claim as True.