Jennifer Granholm
stated on August 10, 2016 in an interview on CNN:
Says Hillary Clinton "abided by the ethics agreement" between the Clinton Foundation and the Obama administration.

A batch of newly released emails between Hillary Clinton’s aides and a Clinton Foundation official set off another debate over whether Clinton blurred the lines dividing the nonprofit bearing her family name and the State Department.

In an Aug. 10 interview with Clinton surrogate and former Michigan Gov. Jennifer Granholm, CNN’s Brianna Keilar brought up one email thread in particular: Clinton Foundation official Doug Band asking Clinton aides Huma Abedin and Cheryl Mills on behalf of Gilbert Chagoury, a Nigerian billionaire and foundation donor of Lebanese descent, to "speak to the substance person re Lebanon," at the department.

Given Clinton’s promise of a firewall between the foundation and the state department, was that exchange "really appropriate?" Keilar asked Granholm.

Granholm pushed back, saying that Band wrote the email as an aide to former President Bill Clinton, not on behalf of the foundation, and the meeting request also didn’t lead to "official action taken on the part of the State Department on his behalf."

Pressed further by Keilar, Granholm then argued that Clinton actually kept her word.

"She has abided by the ethics agreement she signed at the beginning, which was not to take any action on the part of the State Department that mixed foundation business," Granholm said.

Granholm's claim about an ethics agreement is narrowly focused and misses the big picture about concerns of conflict of interest. While Clinton personally has not been directly implicated in mixing the business of the State Department and the Clinton Foundation, there are clear connections between her top aides and Clinton Foundation interests. We'll walk you through it.

The emails in question

The email about the Nigerian billionaire Chagoury is one of two out of 44 email exchanges released by the conservative watchdog group Judicial Watch that link the State Department directly with the Clinton Foundation.

In the email, Band, a member of the Clinton Global Initiative's board, wrote to Clinton top aides Abedin and Mills.

"We need Gilbert Chagoury to speak to the substance person regarding Lebanon. As you know, he’s key guy there and to us and is loved in Lebanon," said the April 2009 email. "Very important." 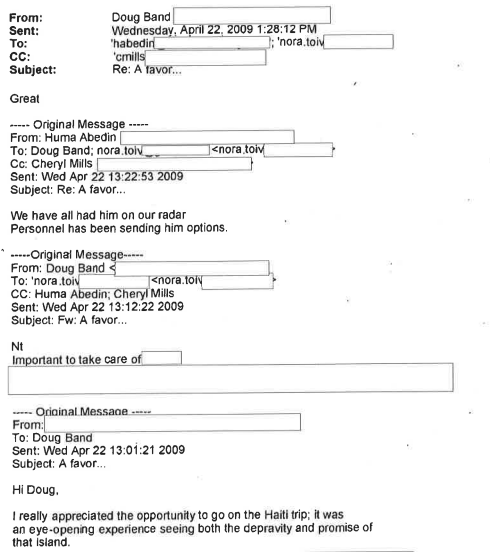 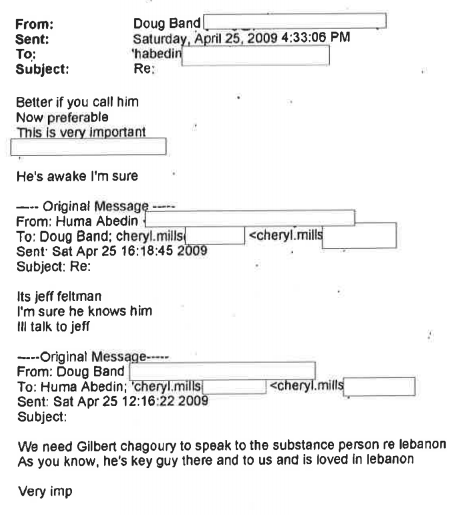 "It’s Jeff Feltman. I’m sure he knows him," Abedin replied, referring to ambassador to Lebanon until 2008. "I’ll talk to Jeff."

Chagoury’s spokesman said in a statement that Chagoury, who donated between $1 million and $5 million to the Clinton Foundation, "was simply passing along his observations and insights about the dire political situation in Lebanon at the time. But nothing ever came of it."

Feltman, who Clinton named the assistant secretary of state for near eastern affairs, confirmed this and told media he had never met with Chagoury or spoken to him.

In a separate thread, Band recommended an unidentified person for a job at the State Department.

"We have all had him on our radar," Abedin wrote back. "Personnel has been sending him some options."

Clinton herself wasn’t involved in either exchange, and the Clinton campaign referred us to a State Department spokeswoman’s comments on the matter.

"The department does not believe it was inappropriate for Mr. Band or any other individual to recommend someone be considered for employment at the State Department," spokeswoman Jennifer Trudeau said. "We also do not believe it’s inappropriate for someone recommended in this matter to be potentially hired insofar as they meet the necessary qualifications for the job."

New emails released after Granholm made her statement, detailed in an Associated Press investigation, show that Clinton took many meetings with foundation donors as secretary of state and offered assistance to several.

Clinton pledged to keep her distance from foundation matters as secretary of state. "I will not participate personally and substantially in any particular matter involving specific parties in which The William J. Clinton Foundation (or the Clinton Global Initiative) is a party or represents a party ...," she said.

The Clinton Foundation signed its own, separate memorandum of understanding with the Obama administration, promising to disclose donors annually and report material donation increases to the State Department among other things.

"The parties also seek to ensure that the activities of the Foundation, however beneficial, do not create conflicts or the appearance of conflicts for Senator Clinton as Secretary of State," the memorandum of understanding reads.

What's clear is that both agreements were intended to minimize conflicts of interest.

And in that regard, experts told us Granholm's comments amount to poorly masked spin that focus on Clinton's personal involvement while ignoring the involvement of her top aides.

Granholm is right that neither agreement prohibits aides facilitating meetings or taking job recommendations, but that's only technically accurate because terms of the agreement were pretty specific to begin with, said John Wonderlich, the director of the nonpartisan Sunlight Foundation.

Granholm offered a lawyerly response that reflects "a certain tone-deafness on the part of the Clintons, their staff and surrogates," said Kathleen Clark, a law professor who specializes in government ethics at Washington University in St. Louis. "It keeps you out of jail but it doesn’t really address the underlying concern."

That concern is that donors and those with ties to the Clinton Foundation could use their connections to curry favor with the U.S. government, "not just whether Clinton is technically violating an ethics statute" narrowly tailored for legal purposes.

So while the emails contain no smoking guns that point to pay-to-play, Wonderlich said, they contribute to "a sense of commingling the personal and the official."

Clark held up the Clinton campaign’s argument that Band sent the emails as Bill Clinton’s aide as an example of a flimsy response.

"That’s nice, but that doesn’t mean there’s not a foundation connection," she said. "The foundation’s work is no doubt laudable, but it’s not at all clear how they are addressing a reasonable perception that giving money to the foundation may help one accomplish goals related to the U.S. government."

Craig Holman of the government accountability think tank Public Citizen said the new emails at least show "an effort was made to secure official favors" for donors.

"The Clinton Foundation itself did not live up to the expectations of the ethics agreement," he said.

Outside of the emails, the Clinton Foundation has actually violated its memorandum of understanding with the State Department.

As previously mentioned, the foundation agreed to disclose donors every year while its various initiatives would do the same and report material increases from existing donors to the state department.

But in 2015, numerous media outlets reported several instances of the Clinton Foundation breaking its promises. There were three major examples:

• Not updating or notifying the State Department on the Clinton Health Access Initiative’s donor list, which included five new foreign countries and two with material increases in giving, from 2010 to 2013

To be clear, none of these disclosure failures are proof of quid pro quo. But experts told us that the Clinton camp and the public should have higher standards.

"The fact that it’s not a bribe may help keep you out of federal prison, but is that good enough?" Clark said.

Granholm said Clinton "abided by the ethics agreement" between the Clinton Foundation and the Obama administration.

That's a misleading response that ignores what occurred at Clinton's State Department.

Experts told us emails between Clinton aides and a foundation aide may not have been prohibited by the specific terms of the ethics pledges. But they demonstrate a blurring of the lines between official government business and Clinton’s personal connections — breaking the firewall Clinton agreed to preserve.

The statement contains an element of truth but ignores critical facts that would give a different impression. We rate it Mostly False.

Associated Press, "MANY DONORS TO CLINTON FOUNDATION MET WITH HER AT STATE," Aug. 24, 2016

PolitiFact, "Did the Clinton Foundation keep its promises? A PolitiFact scorecard," May 7, 2015