But as results from Nov. 8 midterm elections rolled in, it became clear that the ideas pushed by candidates who denied the legitimacy of the 2020 presidential election did not persuade voters to elect them in key races.

Though the outcome of pivotal races in Nevada and Arizona were too close to call the afternoon after Election Day, election deniers running for positions to oversee state elections lost multiple midterm contests elsewhere.

Midterm ballots in nearly every state included candidates who said they believed the 2020 election was fraudulent or "stolen." That raised questions about whether those candidates, if they won, would execute their plans and dismantle the machinery that keeps American democracy running.

"Millions of voters all over the country rejected bids by election deniers to take key roles in overseeing elections in many states and that is a really good thing for 2024 and for the longer-term future of our democracy," said Ben Berwick, counsel at Project Democracy, a nonprofit that fights efforts to undermine democracy.

Many of these election denying candidates were part of the America First Secretary of State Coalition, a group with QAnon ties. A promoter of QAnon who appears under the alias "Juan O Savin" collaborated with some of the candidates. Savin said the coalition was focused on how to "coordinate between the various states to get the right outcome" of elections.

The coalition called for overhauling long-standing voting practices, such as getting rid of state laws that allow anyone to cast a mail ballot. Some coalition members were endorsed by former President Donald Trump.

Berwick and other democracy and voting rights experts said they were optimistic that the results so far showed that voters did not embrace election denialism. (We interviewed experts before the outcome in Arizona and Nevada was clear.) 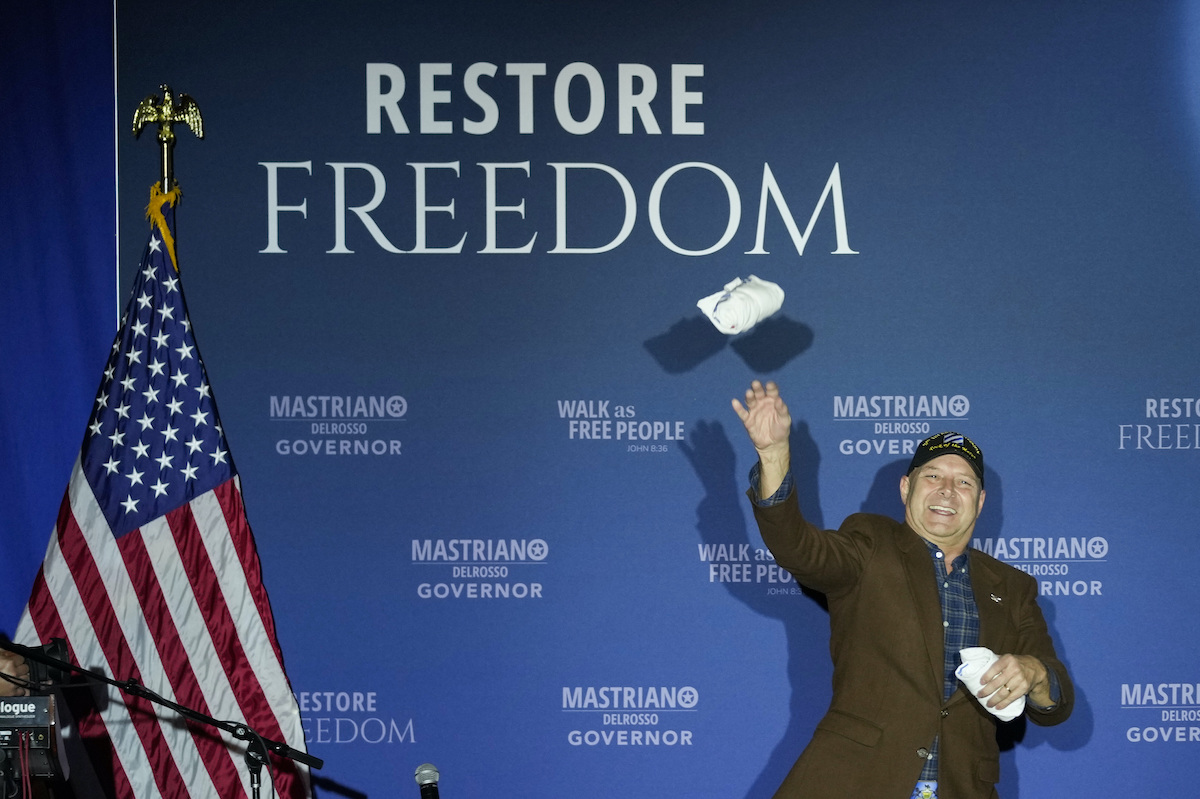 After the vast majority of ballots were counted, media outlets called multiple races showing election deniers lost. The numbers will change over the next couple of weeks as counties report final results, but the outcome won’t change because the margins were not close. The results below were based on unofficial counts from at least 90% of the ballots and culled from New York Times results and showed elect deniers were on track to lose by double-digit margins in these races:

Pennsylvania: Democrat Josh Shapiro defeated Republican Doug Mastriano, a state lawmaker who was outside the U.S. Capitol on Jan. 6, 2021. The governor appoints the secretary of the commonwealth, the state’s top elections official.

Mastriano floated the idea of requiring all voters to re-register and vowed to decertify election machines he believed were rigged. As a state senator in 2020, Mastriano sought to delay certifying the election results and pushed to give the General Assembly control of which electors to send to Washington, rather than follow the will of the voters.

Karamo ran on a vague platform to "remove corruption from our elections" stemming from her experience in 2020 as a presidential election challenger in Detroit. Karamo claimed that in 2020 she witnessed misconduct as she observed election workers processing and counting ballots in Detroit.

But a close look at her allegations about the last election show they don’t provide evidence of fraud or wrongdoing. Rather, PolitiFact Michigan found, Karamo appeared to mistake standard processes for something nefarious.

Minnesota: Secretary of State Steve Simon, a Democrat, beat Republican Kim Crockett, an attorney. Crockett was not a member of the coalition but she called for shortening in-person early voting and limiting who can cast absentee ballots.

New Mexico: Secretary of State Maggie Toulouse Oliver, the Democratic candidate, beat Audrey Trujillo, a Republican who called the 2020 election a coup and was a member of the coalition. 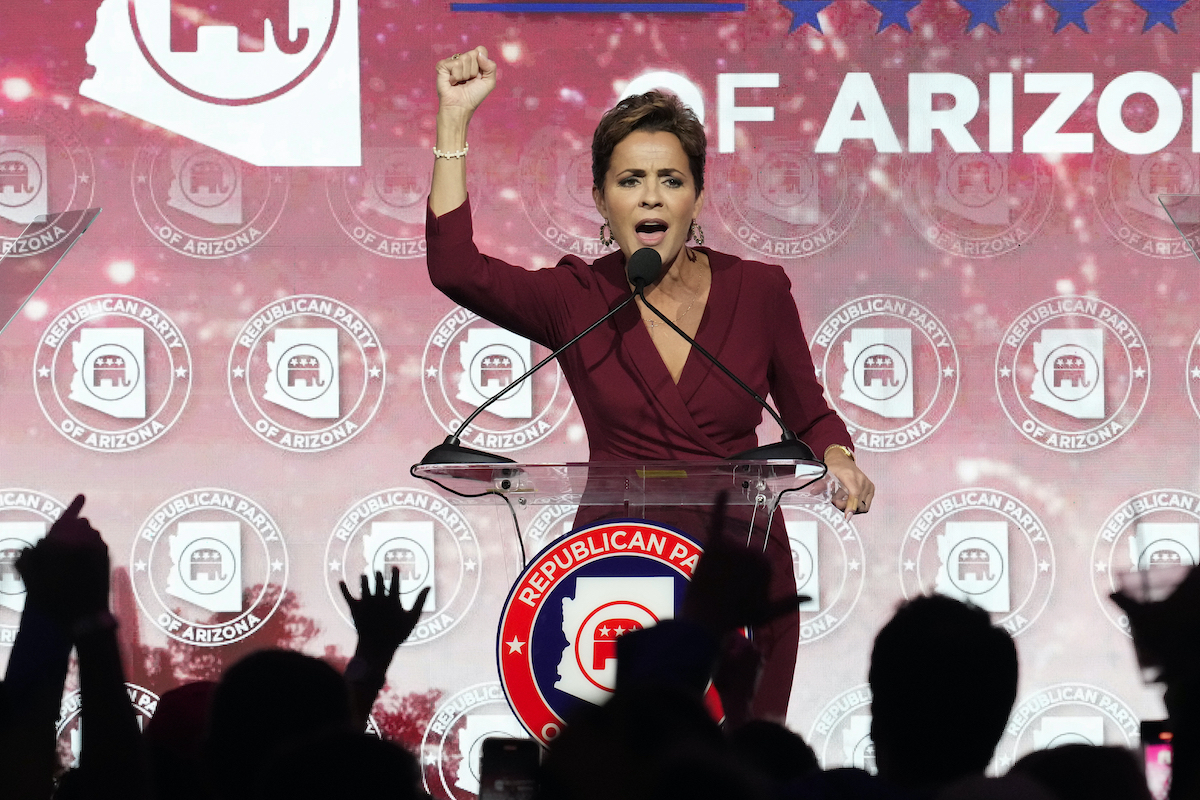 Kari Lake, the Arizona Republican candidate for governor, cheers with her supporters Nov. 8, 2022, at the Republican watch party in Scottsdale, Ariz. (AP)

In Nevada and Arizona, the majority of voters cast ballots by mail, so it takes time to process and verify those ballots. As of midday Nov. 9, the margins were too close for media outlets to project winners in those contests.

Nevada: Republican Jim Marchant, a vocal election denier and key organizer of the America First Coalition, was slightly ahead in his race for secretary of state against Democrat Cisco Aguilar when about three-fourths of the ballots had been counted.

Counties have until Nov. 18 to certify results, but it’s likely that media outlets will declare a projected winner this week.

Marchant launched the coalition after he lost a 2020 congressional race. Marchant wants to eliminate voting by mail with some limited exceptions, such as for military personnel. He has also vowed to drop out of the Electronic Registration Information Center, a bipartisan consortium of states that tries to clean up voter rolls by sharing data on people who died or moved.

Lake illustrated her campaign promise to eliminate electronic voting machines by posing with a sledgehammer following her primary victory.

In the secretary of state race, Republican Mark Finchem was trailing Adrian Fontes, the Democratic candidate, by about 4 percentage points. Finchem, a state representative, authored unsuccessful bills that furthered Trump’s myths about voter fraud, including a resolution to decertify the election and ditch early voting.

Counties have until Nov. 28 to finish counting ballots and the state certifies results Dec. 5. If any statewide race triggers a recount, that will happen after certification.

Election deniers lost, but the movement lives on 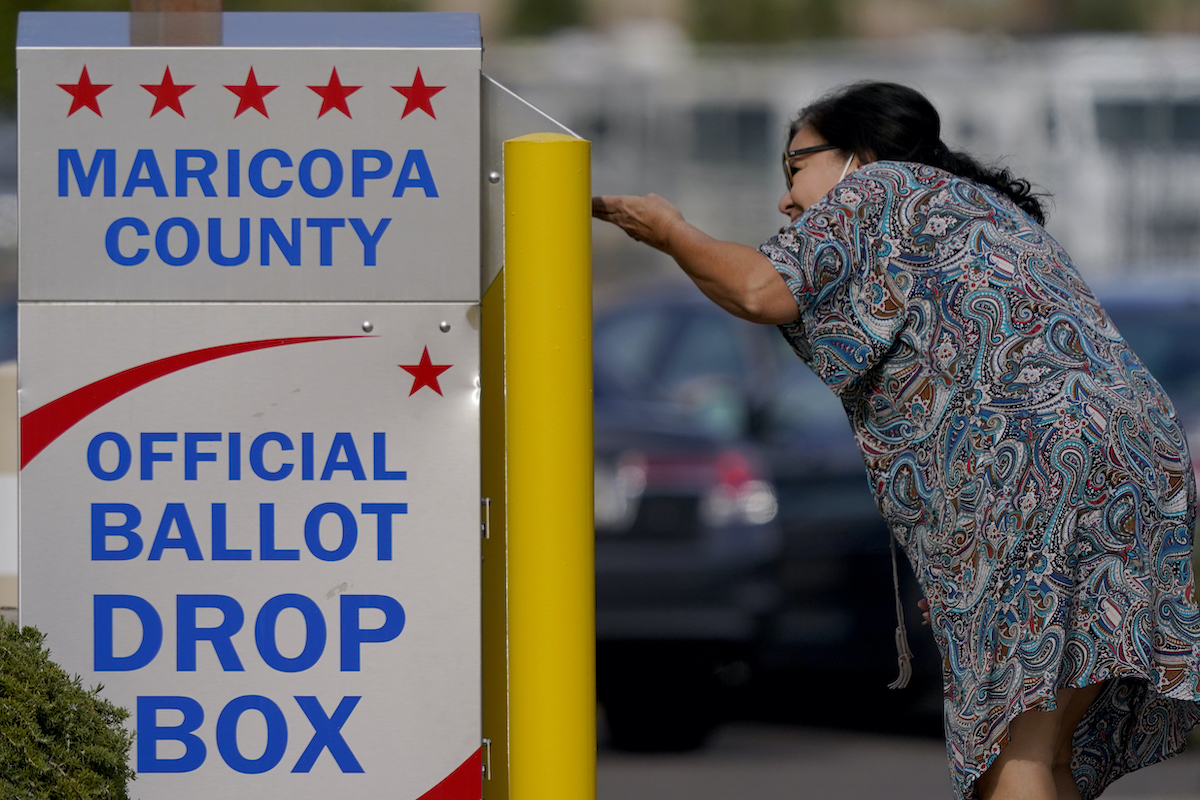 Although the 2022 election dealt a blow to the election denialism movement, it didn’t appear to be a fatal knockout. Some state lawmakers will likely continue the trend, started in 2021, of introducing bills that add restrictions to main-in voting such as new ID rules or limits on the use of ballot drop boxes.

The New York Times found that as of noon Nov. 9, more than 210 Republicans who questioned the 2020 election won seats in the U.S. House and Senate and in state races for governor, secretary of state and attorney general.

But election deniers’ losing governor seats in Pennsylvania, Michigan and Wisconsin  increases the likelihood that any such future bills would get vetoed there.

Sylvia Albert, voting and elections director at voter advocacy group Common Cause, told reporters in a conference call that she expects some politicians will continue the effort to undermine votes and faith in democratic processes.

"No matter where election deniers may or may not hold office, a single person cannot unilaterally overturn the will of the people," she said.

The election denialism movement isn’t going away, Berwick said, but the results so far give reason to question its long-term viability.

"It seems like Americans not completely but pretty convincingly rejected election denialism," he said.

RELATED: How could U.S. voting be affected if election deniers win?

RELATED: A coalition of ‘stop the steal’ Republicans aims to take control of US elections. QAnon is helping