Whether considered an assault rifle or America’s rifle, the AR-15 is emblematic of gun culture in the United States: Gun enthusiasts herald it for its versatility and power, whereas gun control advocates loathe its role in so many mass shootings.

The gunmen in two recent mass shootings, in Uvalde, Texas, and Buffalo, New York, both used AR-15-style weapons. It was the same gun type used to kill children at Sandy Hook Elementary School in Newtown, Connecticut, in 2012, concertgoers in Las Vegas in 2017, and teenagers at Marjory Stoneman Douglas High School in Parkland, Florida, in 2018.

The AR-15 has a storied history. Over the years, it has evolved to become one of the most popular firearms in the U.S. — and the weapon of choice for mass shooters. Despite its lethal reputation, little has been done on the federal or state level to regulate this type of rifle. 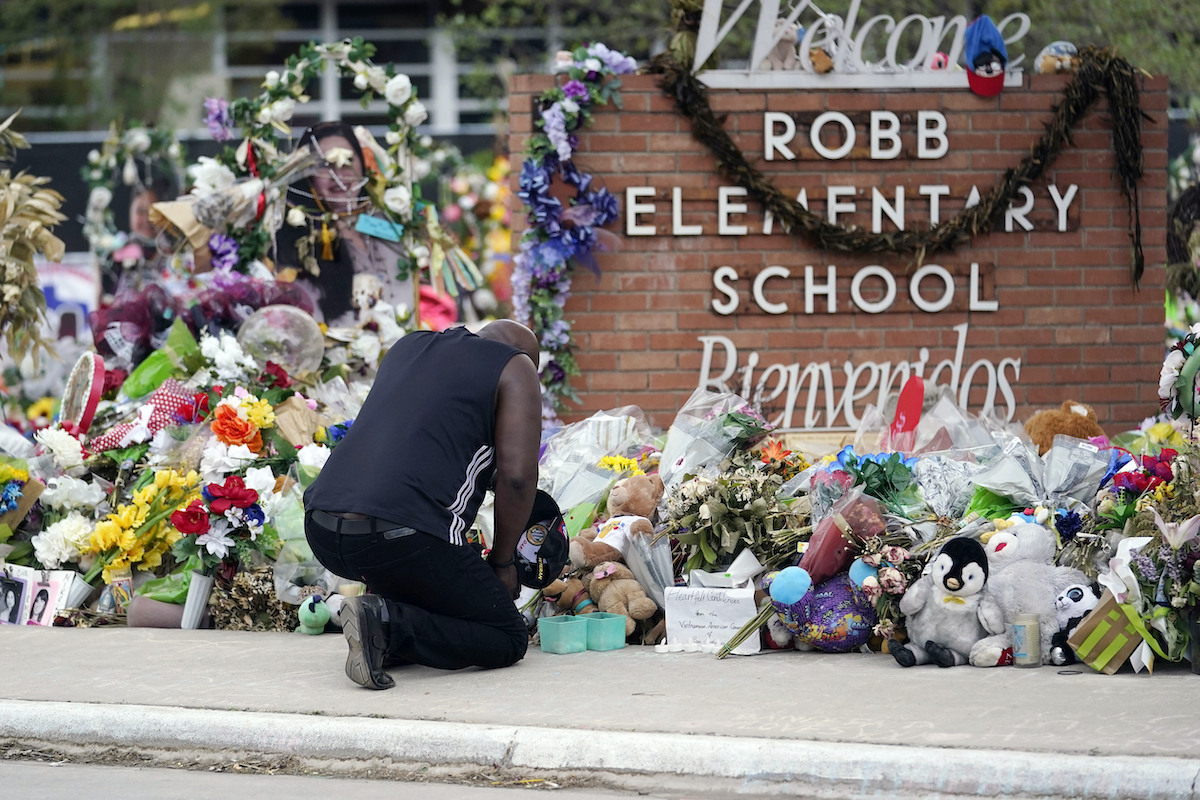 First developed in the 1950s, the AR-15 rifle was named after its manufacturer, Armalite. The letters "AR" do not stand for "assault rifle" or "automatic rifle."

Armalite sold the rifle’s design to another firearms manufacturer, Colt, in 1959. Four years later, the U.S. military selected Colt to manufacture a standard-issue model of the AR-15 — dubbed the M16 — for soldiers in the Vietnam War.

The M16 had issues jamming at first due to incompatibility with a certain type of ammunition. Modifications were later made to fix this issue, but not before many soldiers died on the battlefield because their gun couldn’t fire.

After the war, Colt expanded production of a semi-automatic version of the M16 rifle marketed to law enforcement and civilians.

The AR-15s used in the Uvalde school shooting and other recent mass shootings were semi-automatic.

When Colt’s patents on the AR-15 expired in the 1970s, other manufacturers started to produce their own versions of the rifle — each with its own specific model name. As the AR-15 rose in popularity, the weapon’s name turned into more of an umbrella term for that style of rifle.

Today, as many as 500 companies manufacture AR-15s or accessories for the rifle. Out of the estimated 434 million firearms in civilian possession in the U.S., about 20 million of them are AR-15 style rifles, according to the National Shooting Sports Foundation. 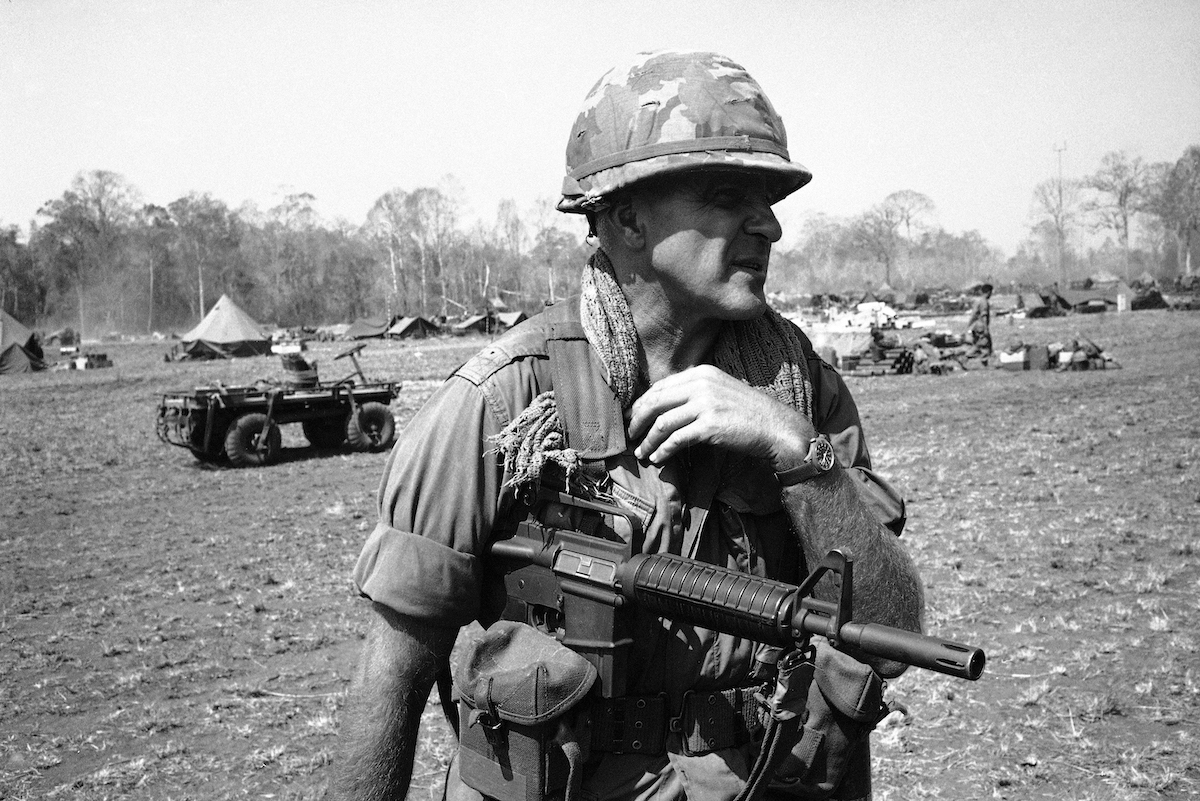 Colonel Robert Sigholtz from Springfield, Virginia holds a new rifle in March 1967, the AR 15, now used by the U.S. infantry in Vietnam​. (AP)

How the AR-15 became "America’s Rifle"

From the beginning, the AR-15 was designed to be easy to use, said Grant Reeher, a political science professor at Syracuse University, and Ryan Busse, senior policy advisor for Giffords, a gun control advocacy group. One reason it was developed as the M16 for the U.S. military is because anyone could pick up the rifle and shoot it with ease, even if they had never used a firearm before.

The rifle is lightweight, weighing about 6 pounds. In a military context, this made it easier for soldiers to carry the gun around for long periods of time. The AR-15, which today sells for between $800 and $2,000, also has an adjustable stock to fit the ergonomics of the shooter, and there’s little recoil after each firing. In most places in the U.S., you can buy an AR-15 when you turn 18.

Some soldiers who returned home after the Vietnam War wanted to own an AR-15 because it was similar to the M16 they had used overseas. The AR-15 was designed to look like its military counterpart, rather than a hunting rifle, for example, said Reeher, who is writing a book on the culture and politics of firearms in the U.S.

The AR-15 has been described as "the Lego of guns," because it is so customizable. You can modify the rifle with accessories or assemble the different parts yourself, making it highly appealing to gun enthusiasts, especially those who like to tinker with firearms.

These features made the AR-15 attractive from the start, earning it the title of "America’s Rifle" from the National Rifle Association. But the rifle’s popularity really took off in the 2000s, after the federal ban on semi-automatic assault weapons expired in 2004.

The federal ban stemmed from a 1994 law, which received bipartisan support in Congress and was signed by President Bill Clinton. It banned the "manufacture, transfer, and possession" of about 118 different firearm models and all magazines with capacities larger than 10 rounds. However, the law also included a grandfather clause — firearms or large capacity magazines made prior to 1994 were still legal.

Although the assault weapons ban did not completely outlaw all AR-15-style rifles, it did impose a social stigma at the time that discouraged sales of the gun, said Busse, who worked in the firearms industry for more than two decades.

Production of AR-15-style rifles fluctuated around the time of the assault weapons ban, according to a 2004 study by the University of Pennsylvania. Before the law took effect and when it was first implemented (from 1990 to 1994), production of AR-15s increased by 81%. Then over the next three years, production dropped by 51%. Production spiked again, this time by 156%, from from 1997 to 2000. 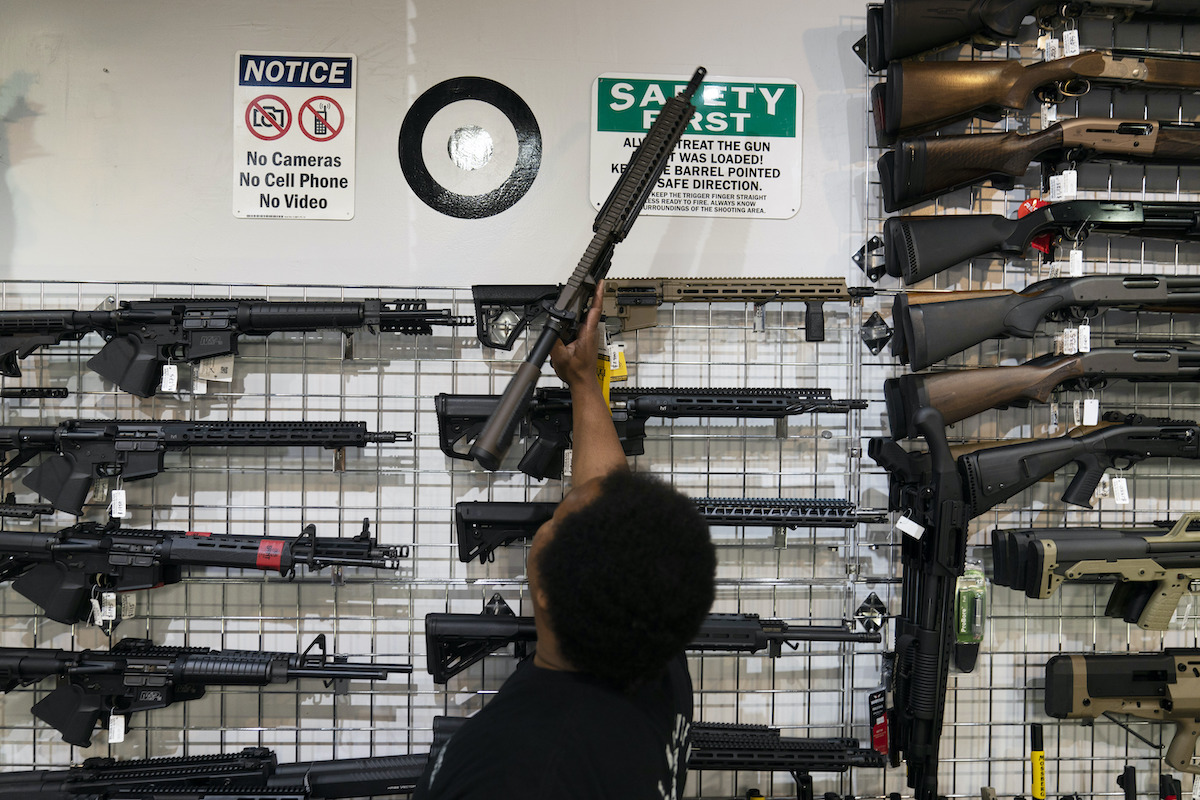 When the ban sunsetted in 2004, under President George W. Bush, the U.S. had undergone a major cultural shift. In the wake of 9/11, patriotic sentiment surged, and support for the military spiked as the U.S. launched wars in Iraq and Afghanistan.

Around the same time, Call of Duty, a first-person shooter video game, was first released, followed by many others of that genre. Over the past two decades, these games that allow people to envision what it could be like to use the weapons themselves have helped bolster the rifle’s popularity, said Reeher, the professor at Syracuse University.

"​You’ve got this whole new set of people that are playing these games and really getting into these rifles. And then they decide, you know what, I want the real thing," Reeher said.

In 2005, the Protection of Lawful Commerce Arms Act was passed, shielding the gun industry from civil action "resulting from the criminal or unlawful misuse" of a firearm or ammunition.

This law "took the lid off" of marketing for the AR-15, leading to many more companies manufacturing or selling the rifle, Busse said.

"By the time (Barack) Obama was leading in the polls in 2007, the AR-15 was starting to become the poster child, both of industry growth, but also what we now see, which is right-wing politics wrapped in and around the firearms industry and firearms ownership," Busse said.

The prevalence of AR-15s in mass shootings 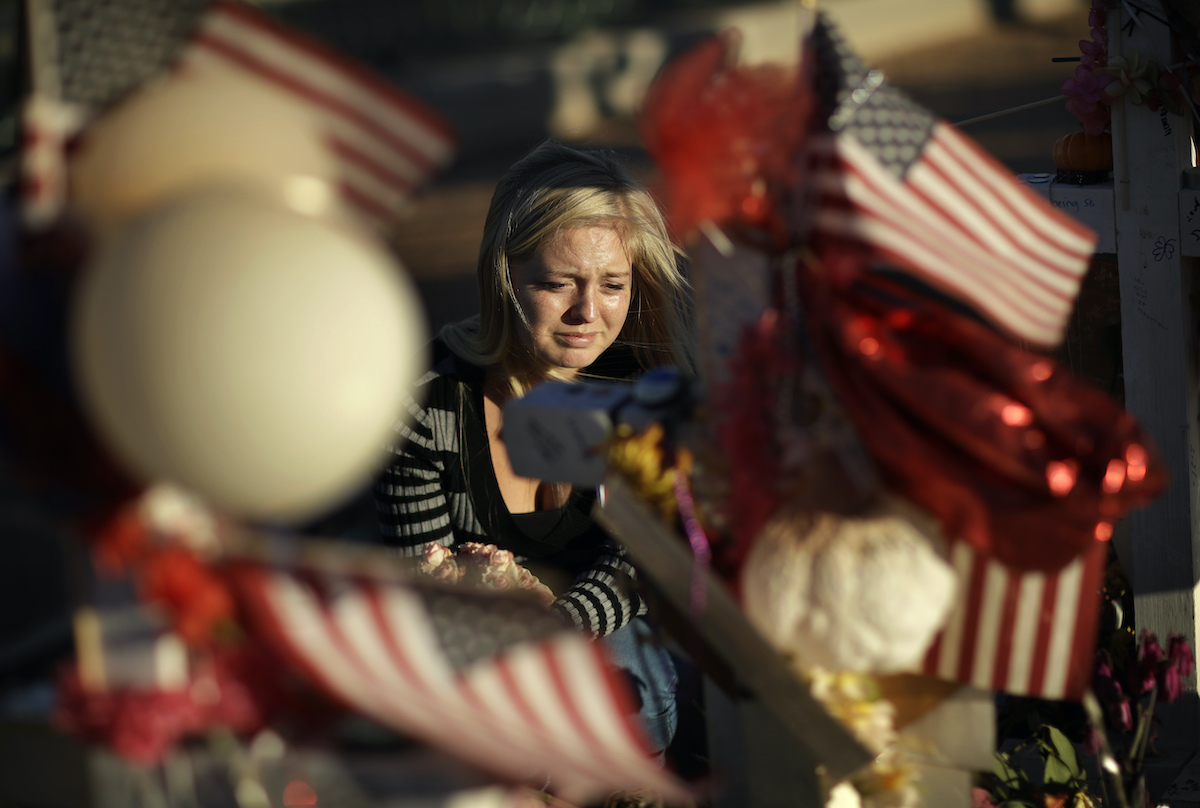 The AR-15 has become inextricably linked with mass shootings in the U.S. A 2020 study by professors at the University of Alabama and Worcester State University found that semi-automatic rifles are being increasingly used in mass shootings.

From 1966 to 2009, about one-third of mass shooters used a semi-automatic rifle, the study found. Over the next decade, that proportion rose to 56%. Perpetrators with semi-automatic rifles killed more people on average than those that used other firearms.

The gunman in the Oct. 1, 2017, Las Vegas shooting used a bump stock to make his semi-automatic rifles fire more rapidly — killing 58 people and injuring 800 within 11 minutes, police said. After that event, the Bureau of Alcohol, Tobacco, Firearms & Explosives amended its regulations to prohibit bump stocks.

Although AR-15s are often used in mass shootings, they are responsible for a fraction of the overall gun-related deaths that occur annually in the U.S.

Suicides accounted for more than half of the 45,222 gun-related deaths in 2020, and homicides made up 43%, according to the Pew Research Center.

Of the 13,650 gun-related homicides in 2020, nearly 60% of them involved a handgun, according to FBI data. By comparison, only 3% of these deaths involved a rifle and 1% involved a shotgun. (The remaining 36% of homicides were classified as "type not stated.") 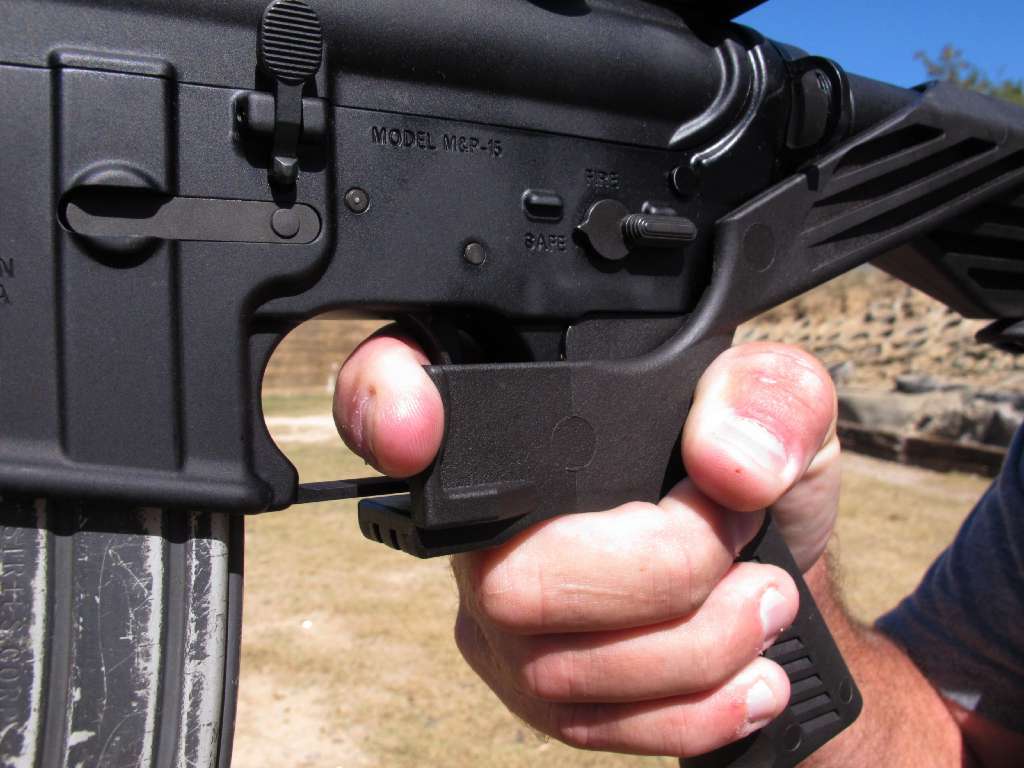 In this Oct. 4, 2017, file photo, shooting instructor Frankie McRae demonstrates the grip on an AR-15 rifle fitted with a bump stock at his 37 PSR Gun Club in Bunnlevel, N.C. (AP)

How AR-15s have been regulated

After a nearly three-decade-long stalemate, Congress passed a bipartisan deal on gun legislation and President Joe Biden signed it into law June 25. While the measure does not go nearly as far as the provisions passed in the mid-1990s, it does modestly expand current gun regulations and provides funding for mental health and school security services.

There is nothing in the new law that specifically addresses AR-15-style rifles. However, it does bolster background checks, including searches of juvenile criminal and mental health records, for gun buyers under 21. There would be a waiting period of up to 10 days for authorities to check these records before the individual could purchase the gun.

While gun regulation at the federal level has been contentious for decades, some states in the meantime have implemented different firearm provisions, including ones that restrict the use of AR-15-style rifles.

These same seven states and D.C. also ban large capacity magazines, or magazines with more than 10 rounds of bullets. Additionally, Colorado caps magazine capacity at 15 rounds. Vermont limits it to 10 rounds for long guns and 15 rounds for handguns.

The previous approach was to focus on the types of weapons. This was reflected in the now-expired federal assault weapons ban, he said.

"But that obviously wasn’t yielding very much fruit," Reeher said. "So now the approach has been to go after classes of people, and say, alright, this group of people should not have access to firearms at all."

What that looks like is enhanced background checks, more stringent rules for domestic violence perpetrators and a greater focus on mental health resources. These are areas, Reeher said, where more political agreement may be possible.

CORRECTION, June 29, 2022: This story has been corrected to reflect the regulation status of fully automatic weapons in the United States.

CORRECTION, July 19, 2022: This story has been corrected to remove the 2016 Pulse nightclub shooting from the list of mass shootings that involved an AR-15-style rifle. This story was also updated to clarify the history, public sentiment and development of the AR-15, and to include production data for the weapon during the federal assault weapons ban.

PolitiFact, "'False flag' claims about the shooting in Buffalo are baseless," May 18, 2022

PolitiFact, "Fact-checking misinformation about the Uvalde school shooting," May 27, 2022

The Washington Post, "Everything you need to know about the assault weapons ban, in one post," Dec. 17, 2012

The University of Pennsylvania and the Urban Institute, "An Updated Assessment of the Federal Assault Weapons Ban: Impacts on Gun Markets and  Gun Violence, 1994-2003," June 2004

Facebook posts
stated on September 14, 2022 a photo on Facebook:
If Jeff Bezos’ net worth reaches $1 trillion, “he could literally end world poverty and give everyone $1 billion and he will still have $91.5 billion left.”

Facebook posts
stated on September 11, 2022 a photo on Facebook:
Says of 9/11, “Two planes can’t cause three buildings to collapse in free-fall time.”

Ben Cline
stated on August 12, 2022 a statement.:
A new Democratic law “will make the IRS workforce larger than the Pentagon, FBI, State Department, and Customs and Border Patrol, combined.”