Maricopa County ballots cast in November are being recounted by contractors under a recount launched by the Arizona State Senate at Veterans Memorial Coliseum in Phoenix, April 29. (Arizona Republic via AP)

Nearly half a year after Arizona voted for Joe Biden, Republicans are pursuing an audit of election results in Maricopa County, fueling ongoing conspiracies about the presidential election.

Republicans who organized the audit of 2.1 million ballots acknowledge that it will have no impact on the 2020 election results. The results were certified by state officials and accepted by Congress.

But the audit could have a broader impact on the democratic process. The state has become the latest battleground where former President Donald Trump and his allies have spread the baseless allegation that the election was stolen by Democrats. Maricopa County, home to Phoenix, has the largest number of registered voters in the state.

Trump, banned from his once-preferred communication platform of Twitter, has been cheering on the audit through statements emailed to reporters through his Save America PAC.

The audit, which has led to legal challenges and battles over media access, raises the possibility that partisan-driven audits or recounts could become a new strategy in future elections beyond Arizona.

Election experts as well as some election officials in other states have criticized the audit.

"This ‘audit’ in Arizona is another step in undermining confidence in elections," tweeted Gabriel Sterling, a Republican election official in Georgia who batted down false election claims by Trump. "This process is neither transparent nor, likely, legal. Any ‘findings’ will be highly suspect now that the chain of custody has been violated by partisan actors."

Here is why the audit is happening, who is involved and what it all means.

Who started the audit and why?

Judges rejected lawsuits on behalf of Republicans seeking to halt certification of the vote or alleging wrongdoing. Maricopa County conducted a hand count audit of a sample of ballots as required by state law and hired independent firms to conduct a forensic audit of tabulation equipment. The county found no abnormalities.

But Republican state senators wanted to do their own full audit of Maricopa. (Republican Gov. Doug Ducey, who stoked Trump’s ire by certifying the results, was not involved.)

"When you have got half the people that do not trust the electoral system anymore — rightly or wrongly so — if they have questions, who is responsible for answering these questions? How do we put election integrity back into our system," Senate President Karen Fann told KTAR News. "And that’s only what this has been about."

In December, Arizona state Senate Republicans sent subpoenas to Maricopa County seeking images of the ballots and election equipment, and a judge ruled in their favor.

Senate Republicans hired a team including Cyber Ninjas, a Florida-based technology company lacking election audit experience. Cyber Ninjas is headed up by Doug Logan, who was part of the "stop the steal" conspiracy theories about the election that culminated in the Jan. 6 Capitol attack.

Who is paying for the audit?

State Senate Republicans agreed to pay Cyber Ninjas $150,000. The firm can also obtain money from additional sources. Christina Bobb, who works for the right-wing One America News Network, which has aired falsehoods about the 2020 election, tweeted April 9 that she launched an entity to raise money for the audit. Later the same day, she announced that the effort had raised $150,000. OAN set up a livestream of the audit at the Veterans Memorial Coliseum.

What do we know about the results so far?

Not much. The audit was not set up to be transparent.

Journalists initially had to apply for access as observers. Arizona Republic reporter Jen Fifield gained access as an observer on April 23 and tweeted that she had to follow certain rules, such as taking no notes. Other reporters applied to be observers, but Fifield told PolitiFact she was the only one who was granted access.

Fifield told MSNBC’s Rachel Maddow that she had her phone in a locker outside the counting room and could use it to file updates when she took breaks. But part way through her shift, she said, she was banned from posting updates.

The Arizona Broadcasters Association, the Arizona Republic and the Arizona Mirror negotiated with a lawyer for the Republicans to set up a pool rotation for journalists allowing for a reporter, photographer and videographer. Journalists are stationed in a press box about 10 rows up from the floor and can now tweet updates — and are doing so using the Twitter hashtag #azauditpool. 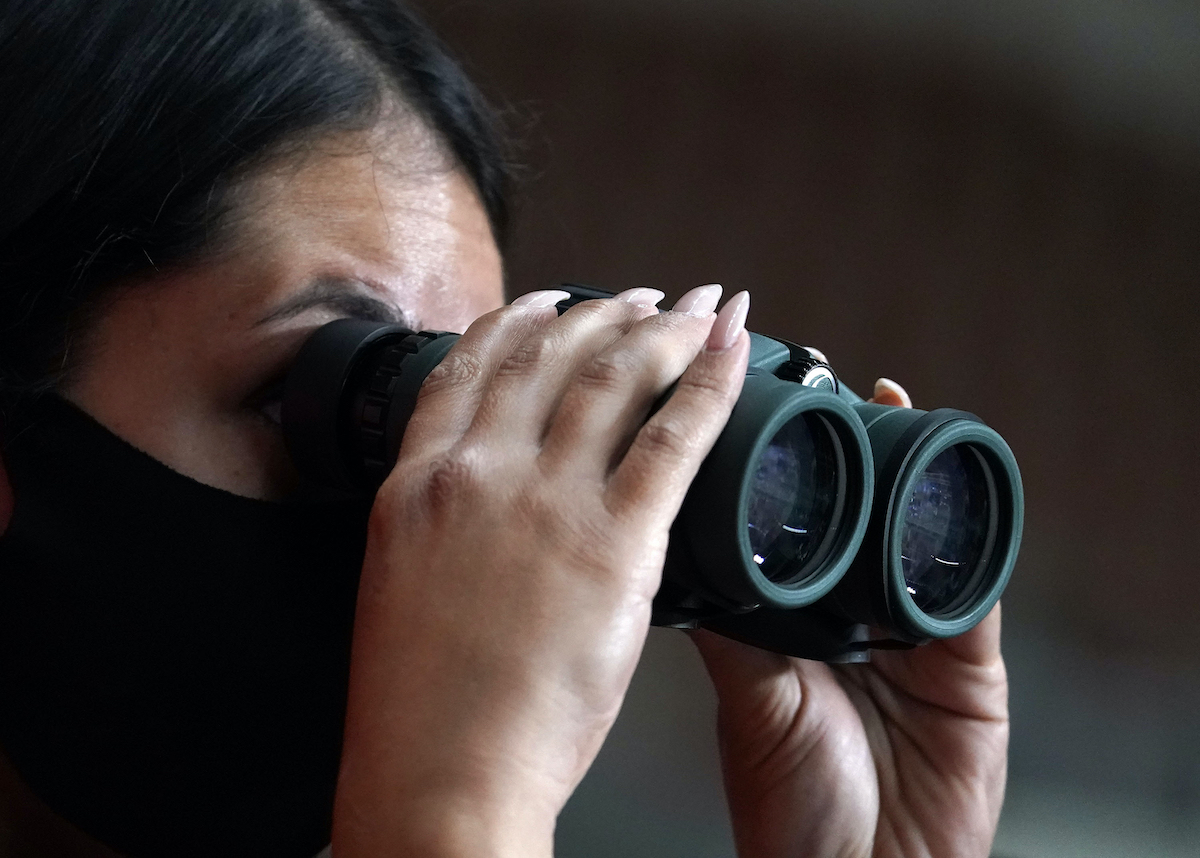 A reporter watches the Maricopa County ballots being examined and recounted at Veterans Memorial Coliseum in Phoenix, April 29, 2021. (Arizona Republic via AP)

A judge ruled that Cyber Ninjas couldn’t keep its policies and procedures secret, leading to the release of about 200 pages of materials to the court.

The documents provide some information about the process, including that it showed auditors were looking for folds in the ballots and examining ballots with ultraviolet light.

Tammy Patrick, an elections expert at the Democracy Fund, said some of the steps don’t fit in with standard audit procedures.

"The things they are doing with UV lights and whether a ballot folded or type of ink used, none of those things are regular parts of audits and here’s why: it tells you nothing," said Patrick, a former federal compliance officer for Maricopa County Elections Department, and a Democrat. "They are making assumptions on each of those things as if it would be an indicator of fraud or malfeasance or problems."

Patrick said the audit is "perpetuating this misunderstanding that there was anything wrong with last year’s election. There was no fraud found."

What do election experts say about the audit?

Ken Bennett, Arizona’s former secretary of state and a liaison for the Senate Republicans, told PolitiFact that the purpose of the audit is to determine if there are ways to improve processes for future elections.

But experts say there is danger in a partisan-run audit orchestrated by a political party.

Chris DeRose, a Republican election law attorney, wrote in an opinion piece in the Washington Post that there was no reason to question Arizona’s election results and that representatives from all parties were allowed to observe every step of the election process. DeRose, a former clerk of the Superior Court for Maricopa County, wrote that no good can come of the audit.

"How could anyone expect a partisan process to yield a result more accurate and trusted than the one administered by professionals of all parties following established rules?" DeRose wrote. "If you’re a Republican who supports this audit, ask yourself this: If the Democrats had lost, how would you feel if this was their response?"

Trey Grayson, a former Kentucky secretary of state and a Republican, said the audit is a "disservice to democracy."

"My concern about this ‘audit’ is that no matter its results, I doubt that it will increase anyone's confidence in the election outcome, and, in fact, is more likely to harden the views of those lacking confidence," Grayson told PolitiFact. "After all, the count is likely to vary because of the lack of rules, training and transparency. So how could anyone feel confident in its finding?

"And if the numbers vary, some may conclude that they simply can't trust an election outcome — even though the inconsistency is entirely the fault of an ill-conceived and poorly executed audit."

When will the audit end?

The audit is expected to break in mid-May to accommodate graduation ceremonies at the coliseum. News reports indicate that the counters have made a dent in the ballots, but the vast majority remain.

Bennett told PolitiFact that the audit could take a total of 60 to 90 days, which would mean it would last potentially until July.

"No findings are being released as we go," Bennett told PolitiFact. "It will be part of the final report to the Senate."

RELATED: No proof for pro-Trump conspiracy theory of secret watermarks on Ariz. ballots

Maricopa County, About the hand count

New York Times, Half a Year After Trump’s Defeat, Arizona Republicans Are Recounting the Vote, April 26, 2021

CNN Wire, Arizona Republicans are conducting a baffling and completely secretive recount of the 2020 election, April 26, 2021

Washington Post Opinion by Chris DeRose, Opinion: Arizona is still fighting about the 2020 election. No good can come of it., May 2, 2021

Arizona Republic, "Arizona election auditors are running ballots under UV light. What could they be looking for?", April 28, 2021

Email interview, Trey Grayson, Managing Director, CivicPoint and former Secretary of State for the Commonwealth of Kentucky, May 3, 2021