What do presidents denied a second term have in common? A poor economy

Herbert Hoover gives the opening address to a "prosperity conference" with his Secretary of Commerce, Roy D. Chapin. (Library of Congress)

• During the past century, only three people have been elected president but then lost a bid for a second term: Herbert Hoover, Jimmy Carter, and George H.W. Bush. Each of the three confronted a weakening economy during their reelection campaign.

• By contrast, every other elected president in that period who sought a second term and won was blessed with declining unemployment rates.

• The three one-term presidents also suffered from a perception that they had lost control of events, and were aloof from Americans’ suffering.

During the past century, only three people have been elected president but then lost a bid for a second term: Herbert Hoover, Jimmy Carter and George H.W. Bush.

Trump still has a chance of winning a second term. But based on historically weak approval ratings and consistent deficits in head-to-head polls with Democratic nominee Joe Biden, most analysts consider Trump to be an underdog in the run-up to Election Day.

Of course, every election is different. The 2020 election, for instance, has been shaped by the coronavirus — a crisis of unusual seriousness for any president seeking reelection. Carter, for his part, faced the Iranian hostage crisis in 1979.

But there’s one metric that every president running for a second term must face: How did the economy perform during their first term?

It’s tricky to try to compare the current coronavirus recession with earlier ones, because key economic indicators in a pandemic are volatile as they track the changing restrictions for businesses and individuals. Still, there are some common patterns.

A look at the unemployment rates during the first terms of Carter and the elder Bush shows a different trajectory. For both of these one-term presidents, the unemployment rate drifted upwards in the final year or two before the election. By historical standards, the recessions under Carter and George H.W. Bush were mild, but they were enough to be a significant burden on the incumbent, historians say.

When you factor in the unemployment rate pattern under Trump, the spike is even more dramatic. (Herbert Hoover also had a spike during the onset of the Great Depression, but the statistics that were collected at the time aren’t comparable with current data.)

In other words, the statistics show that a downturn can doom a president’s quest for a second term. And in the cases of Hoover, Carter, and the elder Bush, historians say another factor exacerbated this pattern.

"The common denominator is that all three presidents appeared to have lost control of events," said John J. Pitney, Jr., a Claremont McKenna College political scientist.

The Great Depression hit when Hoover was president, and most historians agree that his attempts to limit the damage were insufficient.

"The nation fell prey to a crisis that was not of Hoover’s making, but Hoover’s response was notably ineffective, while Hoover himself insisted it had been not only adequate, but superb," said Eric Rauchway, a historian at the University of California-Davis and author of "Winter War: Hoover, Roosevelt, and the First Clash Over the New Deal." 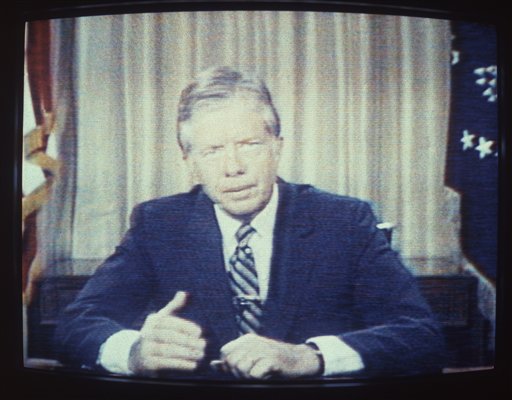 President Jimmy Carter delivers an energy speech in 1979 in which he spoke of a "crisis of confidence." Some called it the "malaise" speech. (AP)

As for Carter, the stagnant economy, high rates of inflation, and rising gasoline prices were worsened by his "failure to control the media narrative of these events," said Amber Roessner, a journalism professor at the University of Tennessee and author of "Jimmy Carter and the Birth of the Marathon Media Campaign."

A related factor seemed to hamper Bush: The perception that he was less attuned to Americans’ sentiments than his two more folksy opponents, Democrat Bill Clinton and Independent Ross Perot. 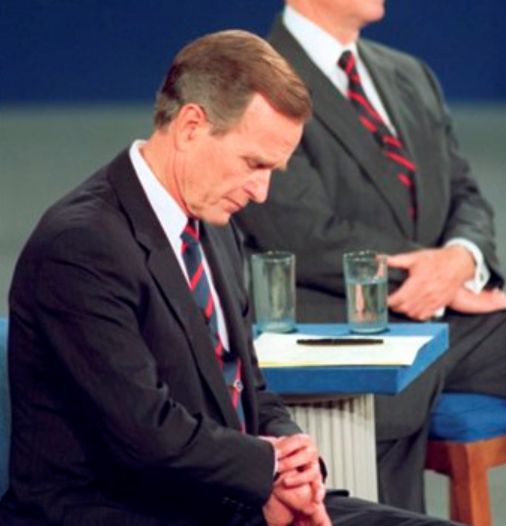 President George H.W. Bush checks his watch during a debate with Bill Clinton and Ross Perot in 1992. (AP)

Bush "was seen as not caring enough about ordinary people’s suffering," said David Greenberg, a presidential historian at Rutgers University. Like Hoover and Carter, Bush also had a stubborn streak. "They all thought they were smarter than pretty much everyone else, and that kept them from taking advice and changing their minds," Greenberg said.

Email interview with Eric Rauchway, historian at the University of California-Davis and author of "Winter War: Hoover, Roosevelt, and the First Clash Over the New Deal," Oct. 14, 2020

Email interview with Amber Roessner, journalism professor at the University of Tennessee and author of "Jimmy Carter and the Birth of the Marathon Media Campaign," Oct. 14, 2020

Email interview with Barbara A. Perry, director of presidential studies at the University of Virginia’s Miller Center, Oct. 15, 2020

Joe Biden
stated on March 1, 2022 his State of the Union address:
“Our economy created over 6.5 million new jobs just last year, more jobs in one year than ever before in the history of the United States of America.”

Dmitry Peskov
stated on February 20, 2022 an interview with a Russian TV network:
“Russia has never attacked anyone throughout its history.”

Patrick Gaspard
stated on February 13, 2022 remarks on ABC's "This Week":
"Inflation has been caused by the global economies shutting down all at once, reopening all at once. And … the U.S. economy is recovering at a far faster pace than any other country in the OECD."